It’s been a while since our Europe trip, but we have had so much going on that I haven’t had a chance to share the details of our trip with everyone.  After our trip I dove into studying for the bar, house hunting, buying a house, multiple trips, and job searching.  But the day after I graduated from law school in May Tom and I jumped on a plane to Germany to hang out with my mom and Mark in Europe for 2 weeks (oops and don’t forget Mr. Humphrey’s)!

I get flight anxiety and haven’t done the long flight to Europe in 6 years (too long), so I was nervous about the flight, but it ended up being great!  The plane was so big I really couldn’t feel anything, and the free wine helped also.  Actually that helped the most.  I watched TV the whole flight and thought that the food was great. 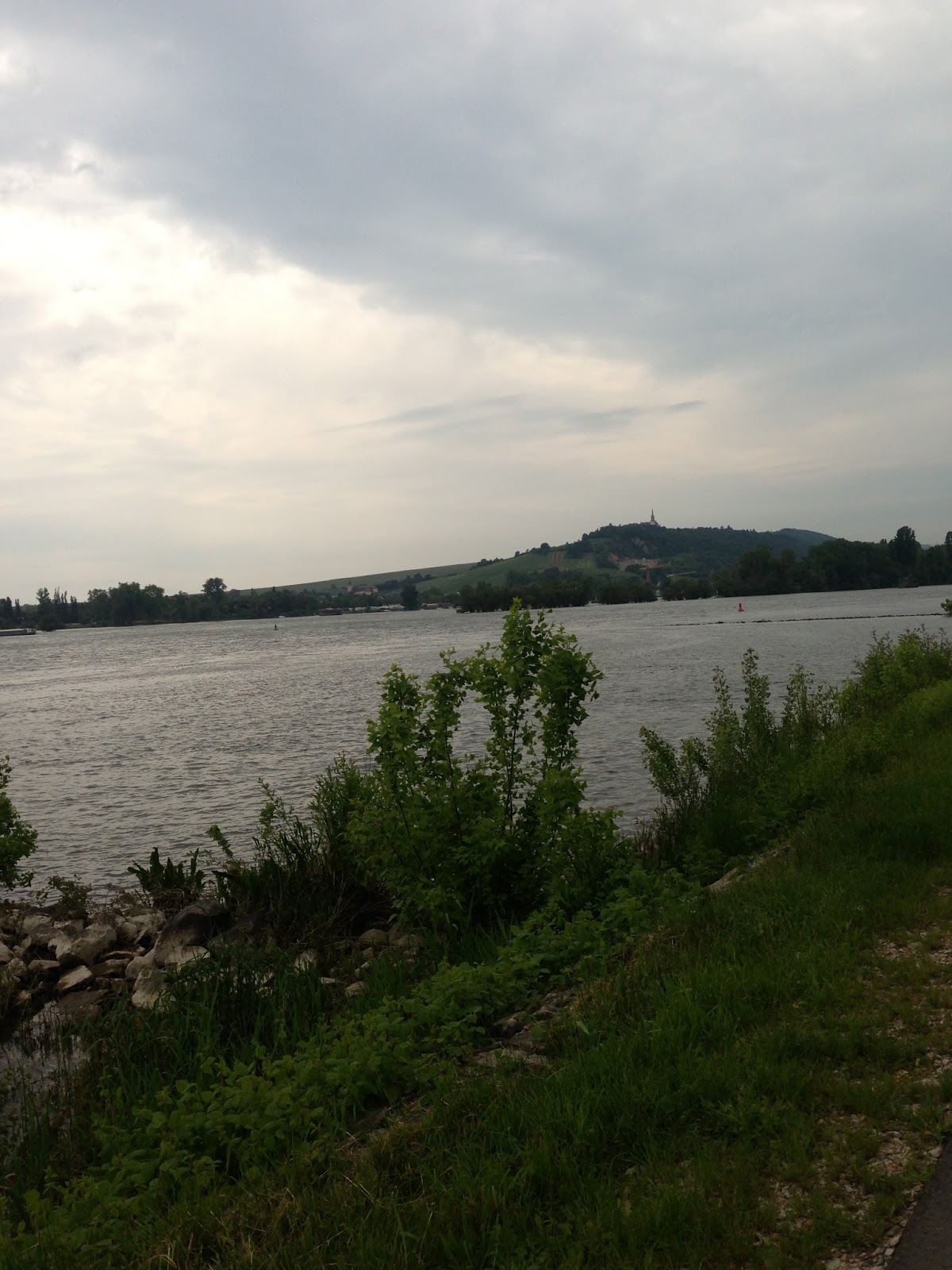 My mom and Mark met us at the Frankfurt airport and started their mission of not letting us sleep at all to help us get on German time.  This was… rough.  I was pretty much falling asleep the whole first day.  We went to a city on the Rhine and tried some local wine and food.  The Rhine was beautiful and the wine was too.Then we traveled on to my mom’s apartment.  My mom lives in a city called Wiesbaden, which is to the west of Frankfurt.  I thought it would be a small town but it is actually a large, fancy city. My mom and Mark live in an apartment on the fifth floor of a building close to the city center which is a beautiful pedestrian only area, or Fußgängerzone, full of shops, restaurants, and bars.  None of these pictures are very good or capture how beautiful the city is, but at least hopefully they can give you an idea of what it is like: 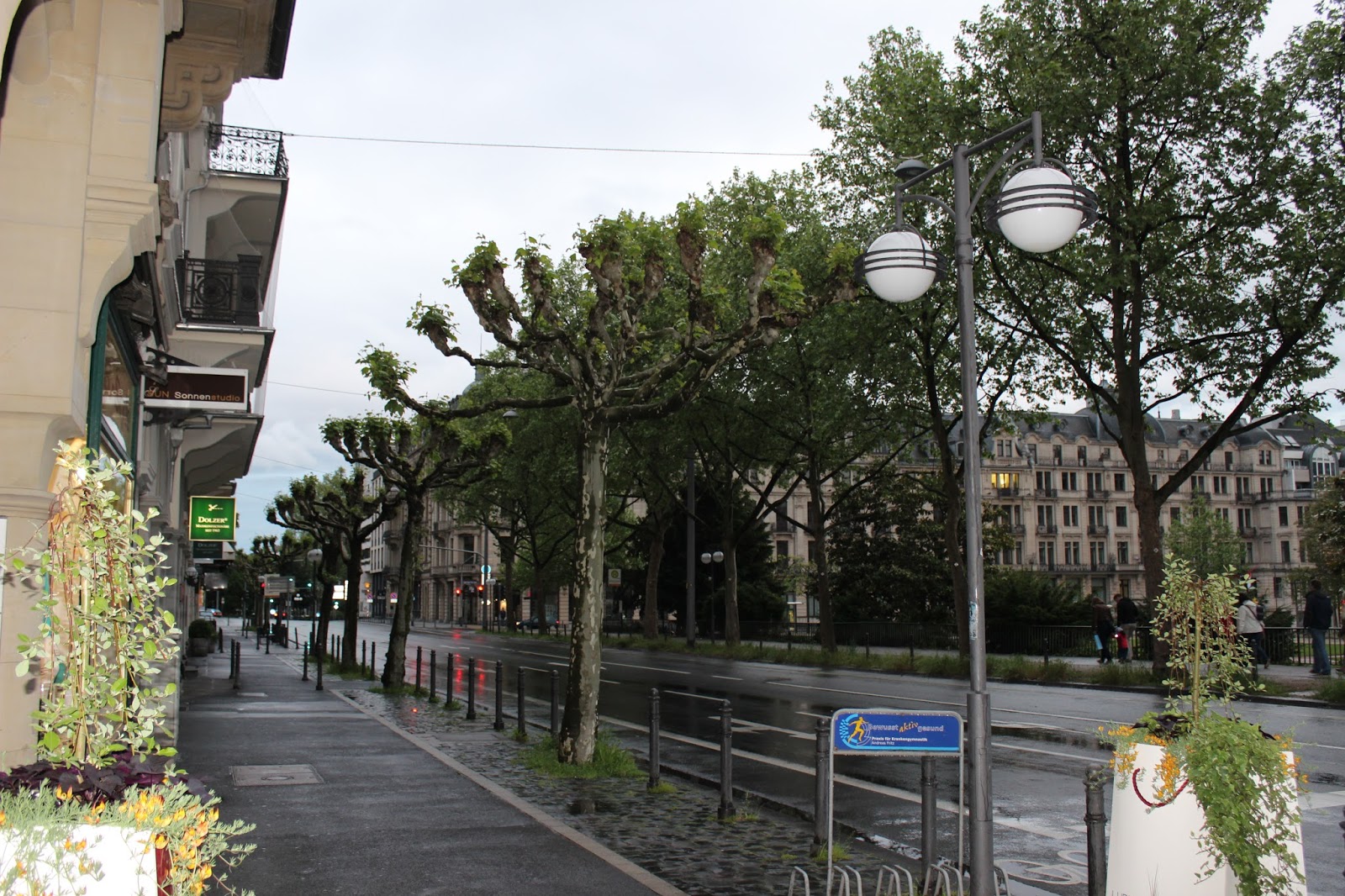 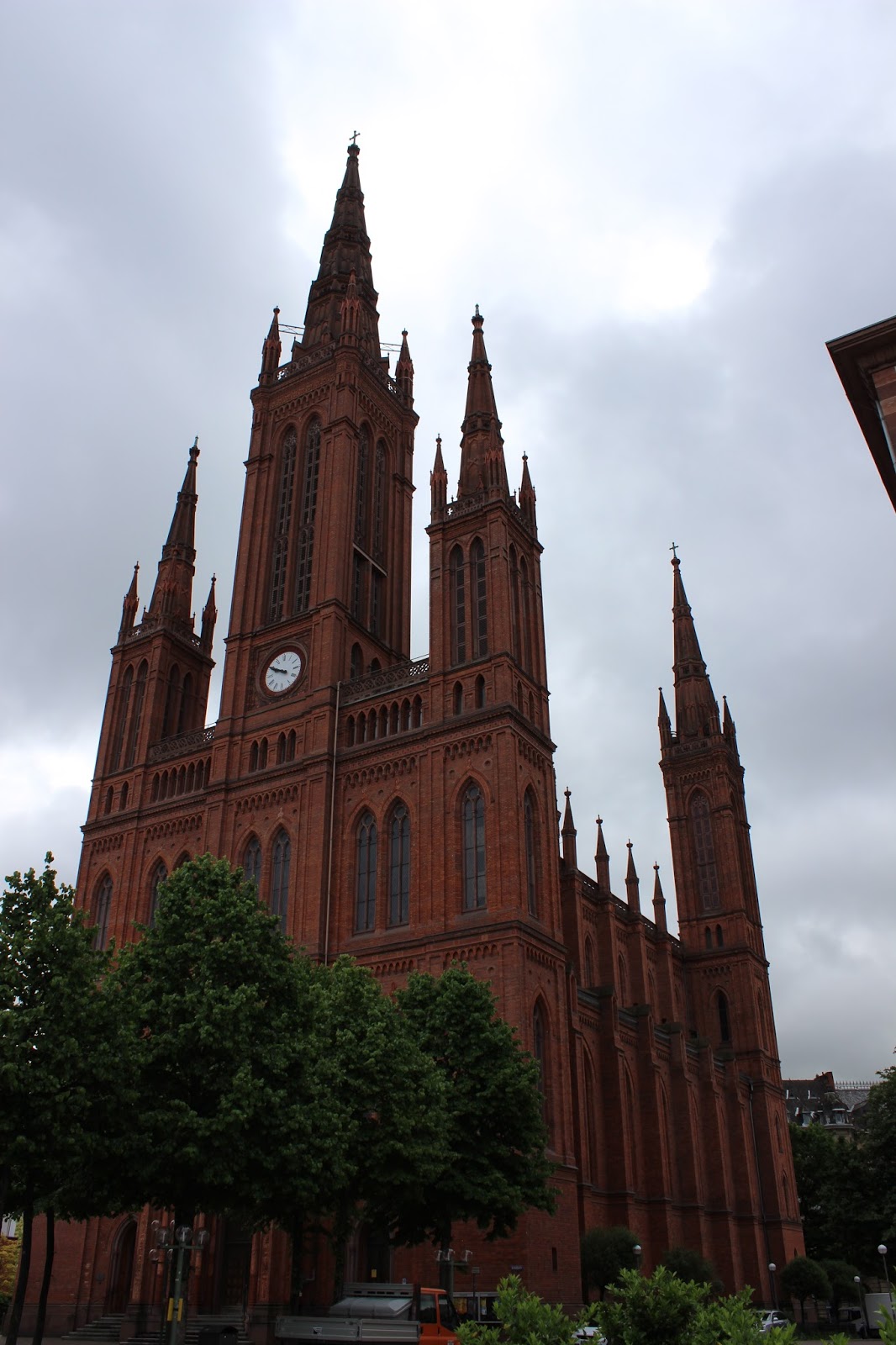 The next day we did some exploring around Wiesbaden, and my mom took us on a hiking trip in the woods/mountains surrounding Wiesbaden.  My mom’s street ends about a half mile down from her apartment and a trail starts. Although it was rainy it was still a nice walk, and we found a really fun playground to play on. 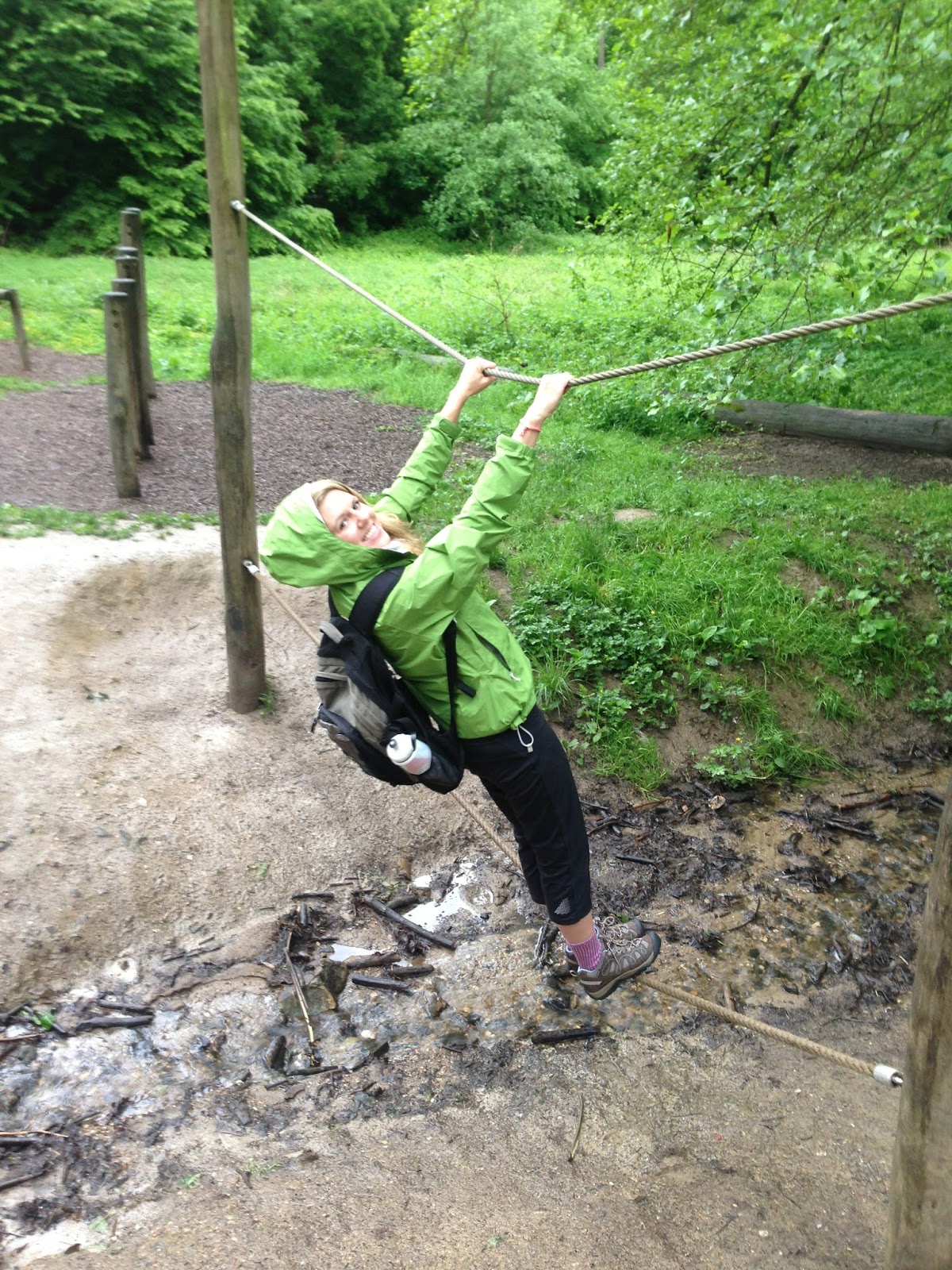 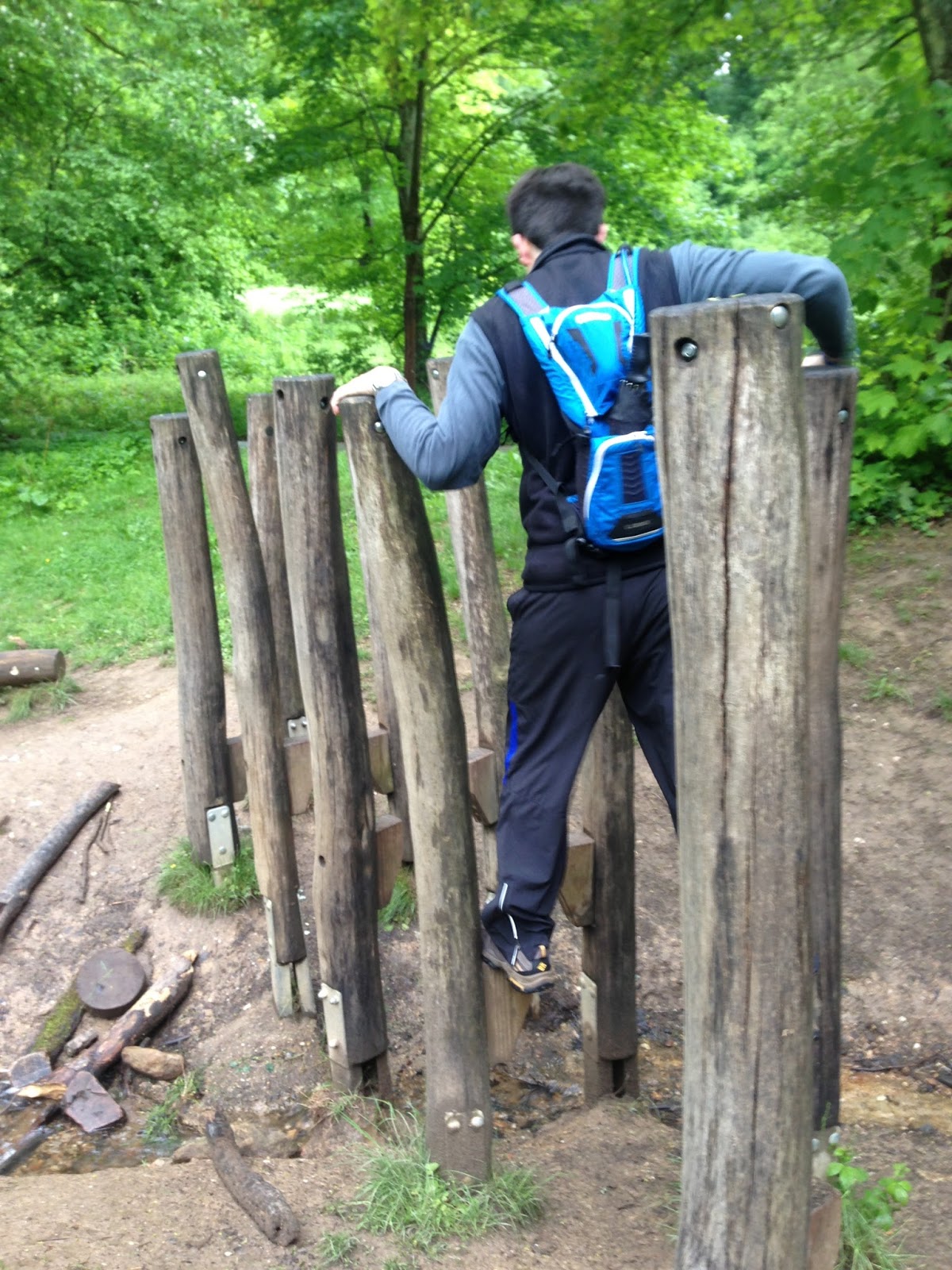 We also spent a day in Mainz, a city pretty close to Wiesbaden (only took us about 30 minutes to get there by train), which had some cool churches and the Guggenheim Museum, which houses the Guggenheim Bibles, along with a history of the printing press.  We had lunch at a Mexican restaurant, which I didn’t think came close to American Mexican food. 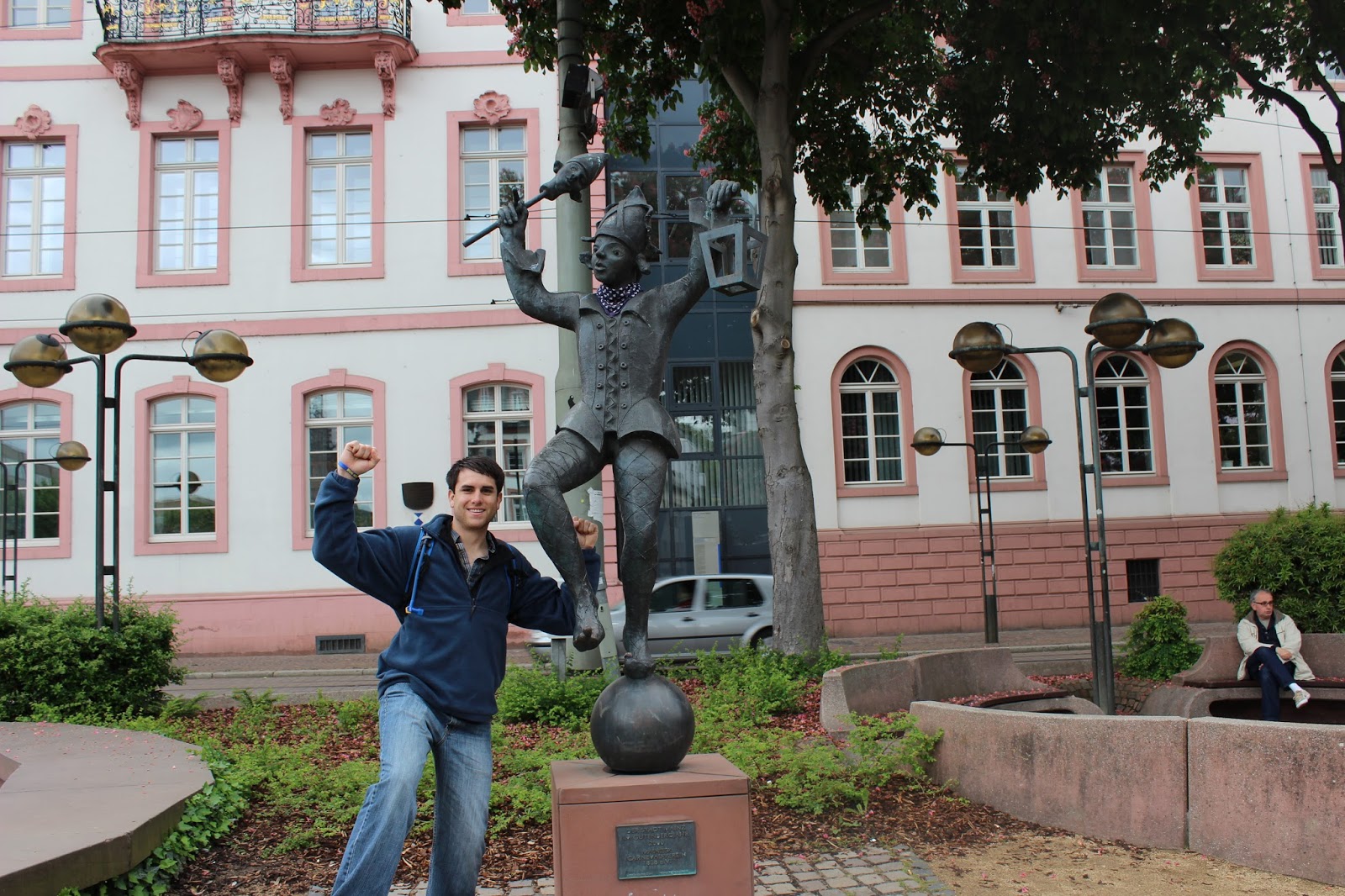 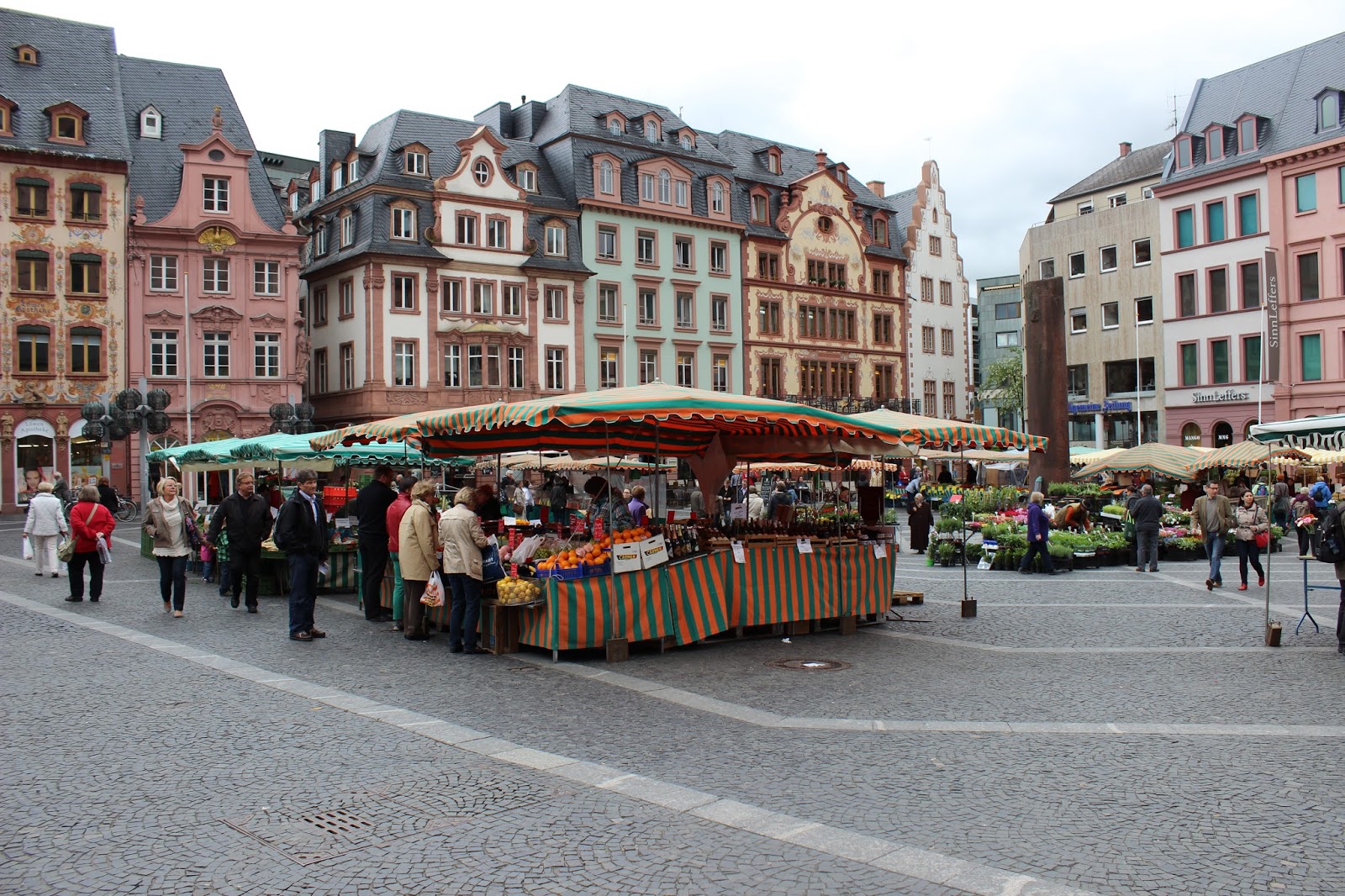 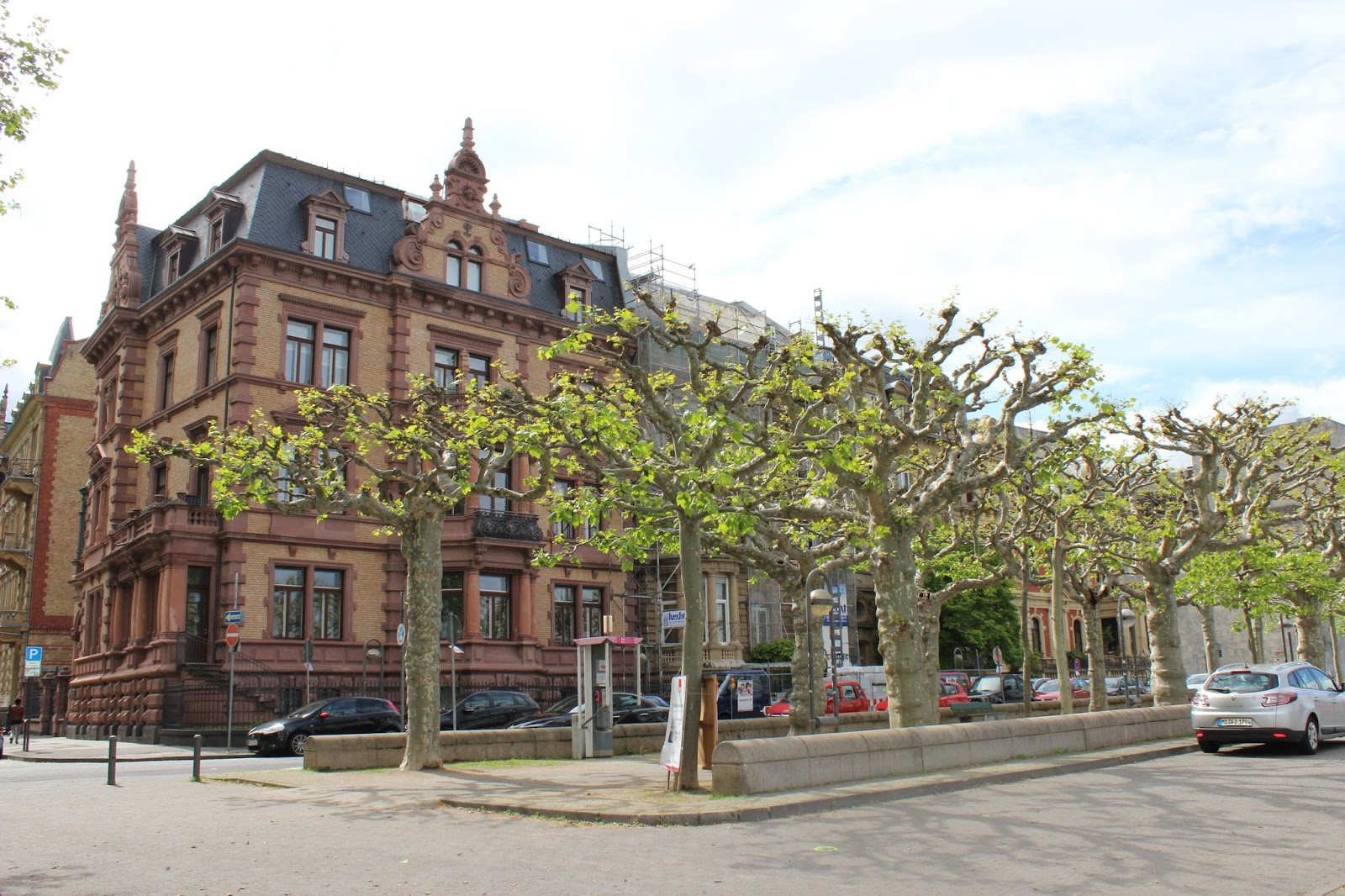 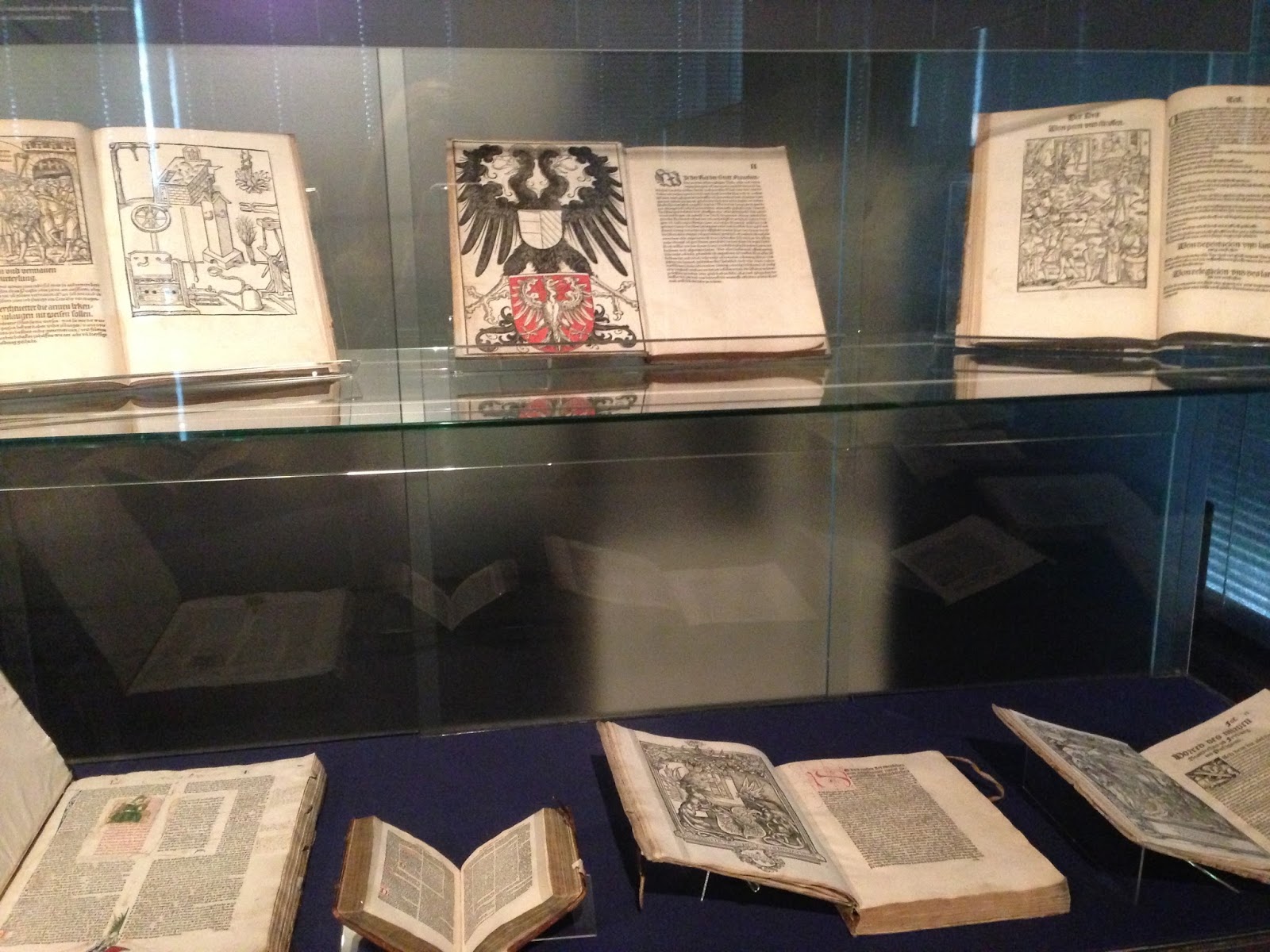 We saw Yorkies all over Germany, except unlike in America they all had tails, because it’s illegal to clip the tails of dogs in Germany.  I thought the tails made them cuter – I wish they didn’t all have clipped tails here!  Also, my mom informed us that Mr. Humphrey’s name is actually now Herr Heinrich von Humpmeister.  He is a very German dog. 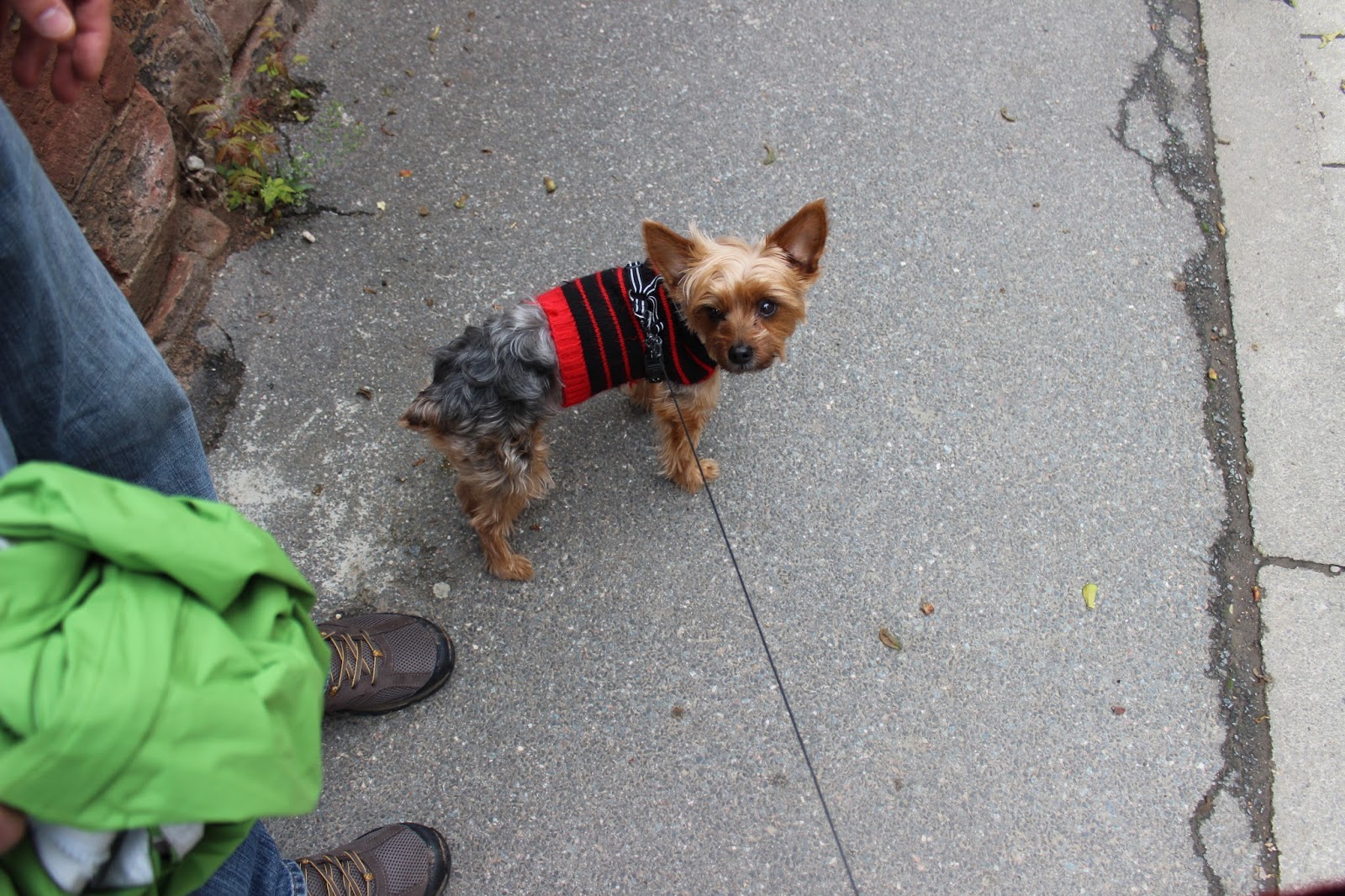 The next few days were rainy and cold but we still explored the city: we shopped, tried different food (lots of doner kabobs), checked out some museums in the city, and etc.  One night my mom got us all tickets to see a dance performance at the local theater.  The Wiesbaden Operahouse was stunning, I really enjoyed just being inside it.  You don’t see a lot of theaters in the U.S. with the type of intricacy that this one had.  I took a few pictures but they don’t do it justice.  We sat down for the show expecting a ballet or modern dance performance, not entirely sure since everything was in German.  But apparently we were there for a juggling performance!  It was quite interesting, it was a touring juggling troupe from England. The first song they juggled to had a chorus of “I’ve always wanted to walk on the Rhine…” and the song was stuck in all of our heads for the rest of the trip (and after).  They were juggling apples the entire show, and towards the end china plates as well, and at the very end they smashed all the plates and apples making a mess of the stage.  Maybe there was a deeper meaning behind it?  One of my favorite things about the performance was that the theater sells wine gummies at it – gummy bears soaked in wine.  Winning.

Then we left for a long weekend trip to Brussels and Paris!  I had been to Paris before as a child, but it was Tom’s first time there, and it was both of ours first trip to Brussels.  I fell in love with Brussels despite it being rainy and cold.  It is just so beautiful, people are friendly, waffles are delicious, and beer is (very) strong.  We saw the famous pissing statute and to top it off there was both a wine and a jazz festival going on when we were there, both of which we checked out and enjoyed. 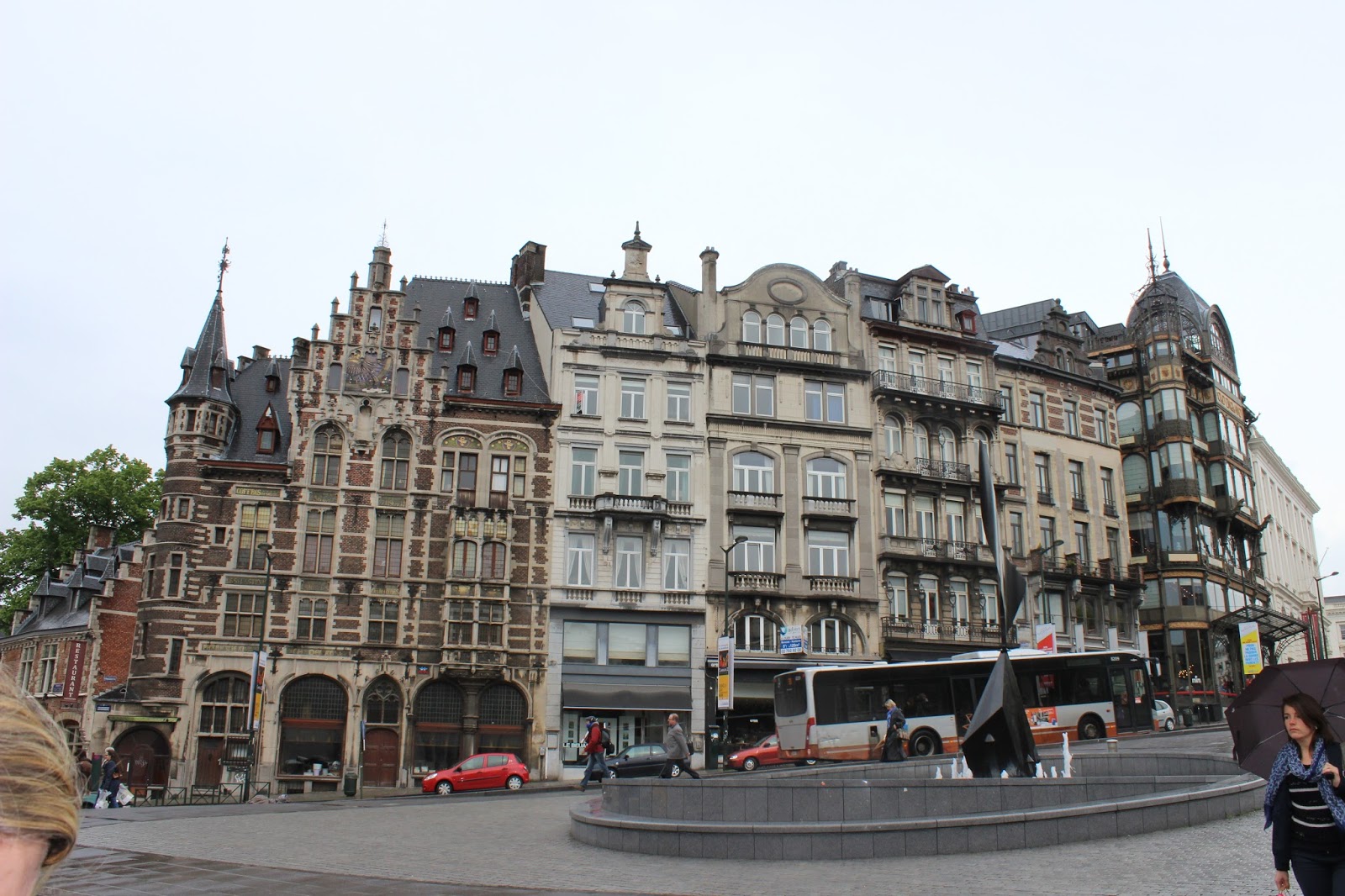 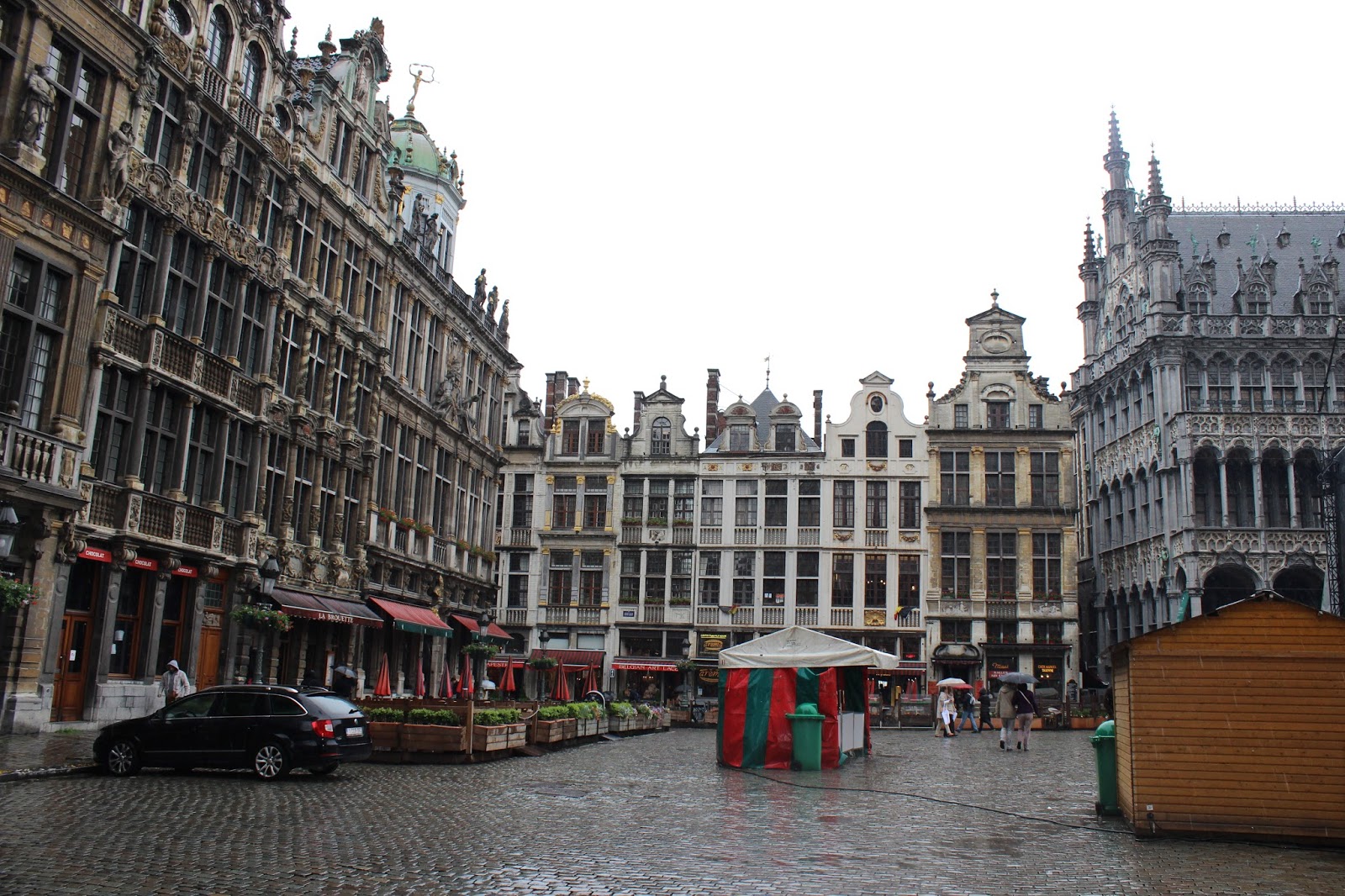 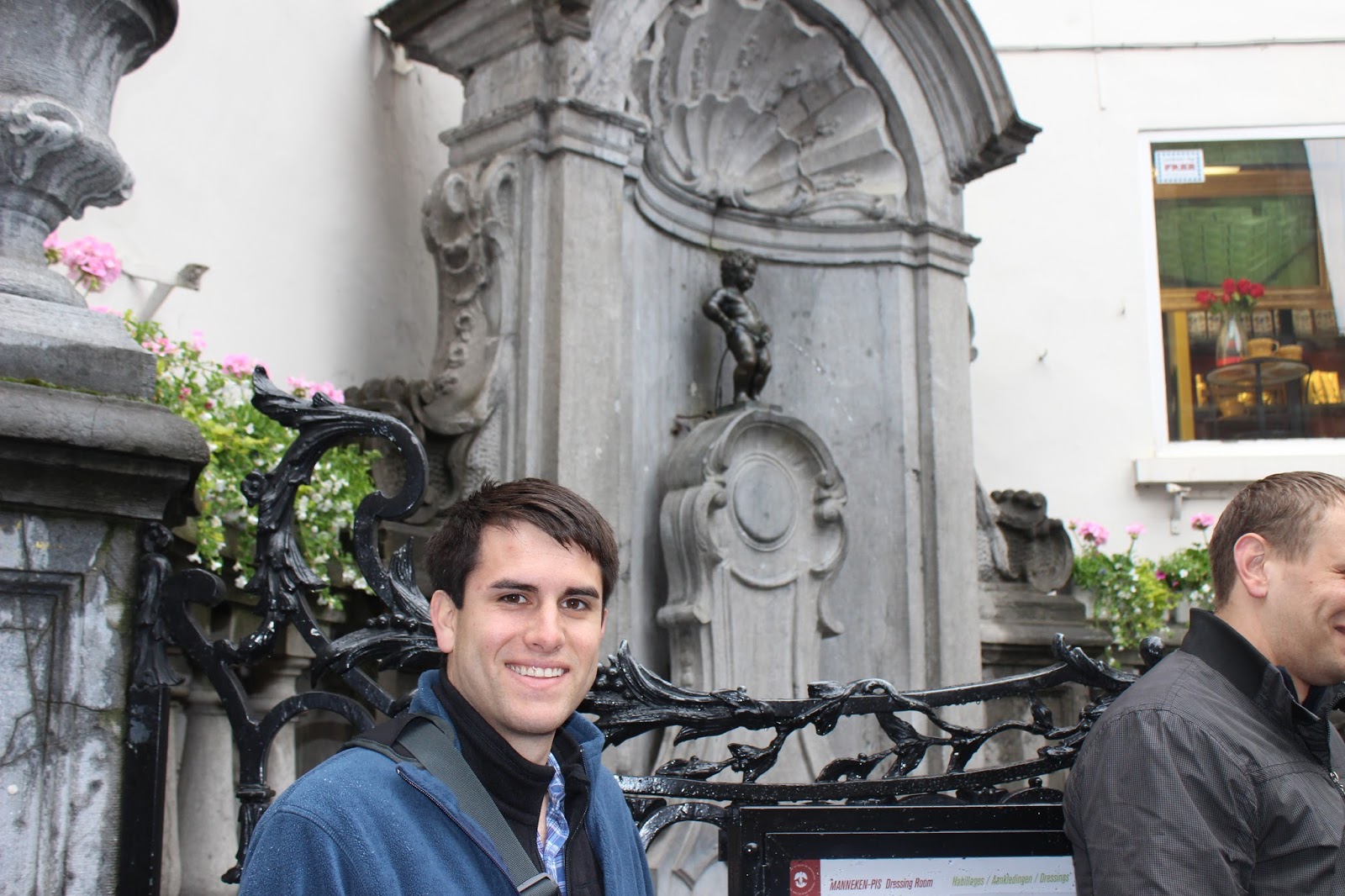 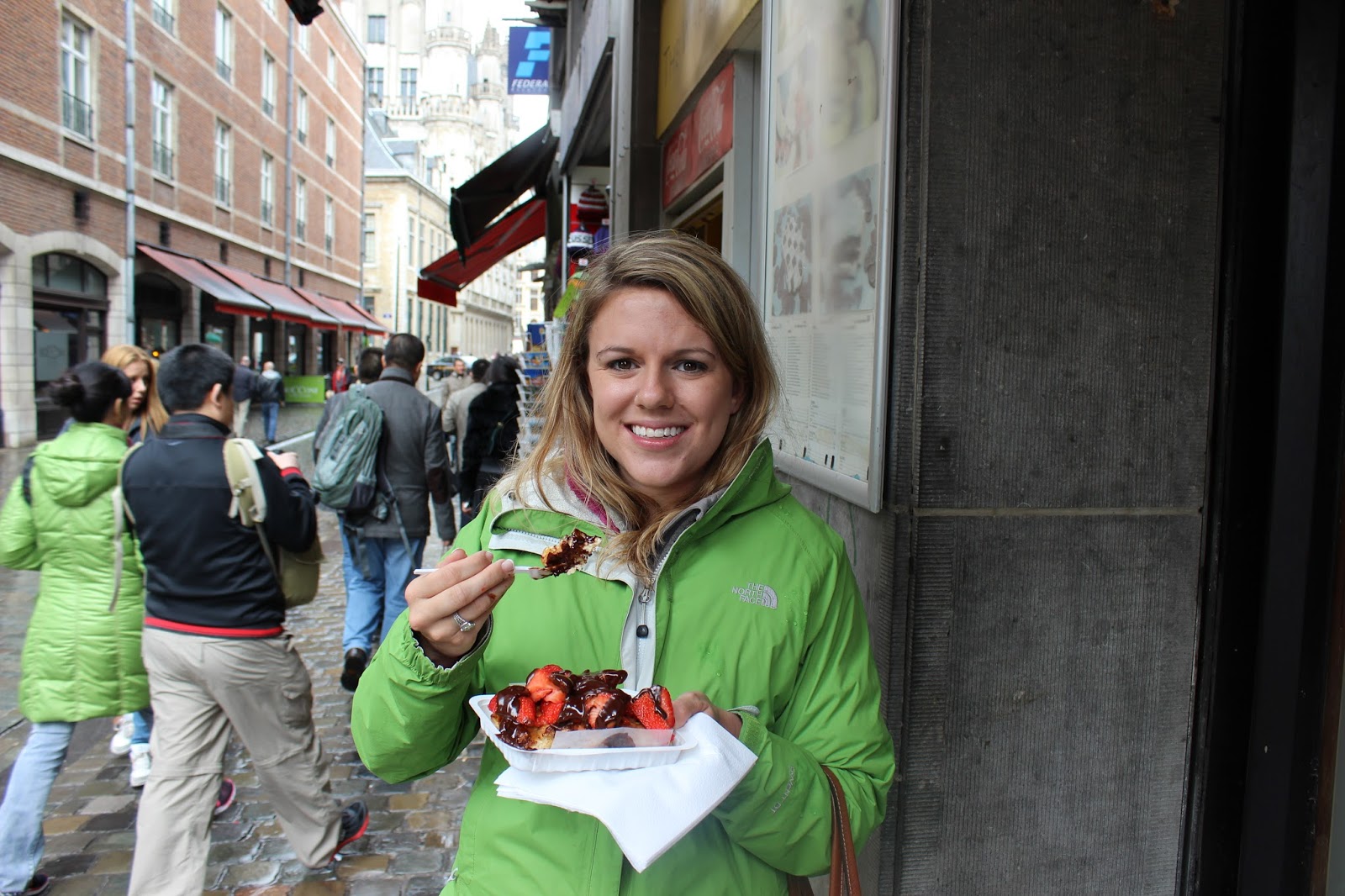 I think if we all knew how much we were going to enjoy Brussels we would have stayed another night or two.  But instead we jetted off to Paris and immediately started off sightseeing.  First stop was Notre Dame, Eiffel Tour, and walking around.  We also went to the Musee D’Orsee while we were there, the Pere-Lachaise Cemetary, put a lock on lovers bridge, and all the other typical stuff.  One day we were there we came across a huge protest so we found a cheap bar with outside seats and watched.  We found out from a guy there that the protest were people who didn’t want gays to be allowed to adopt or have children using surrogates.  Overall we had a great time.  Next time in Paris though I would like to explore the less-touristy side of the city. 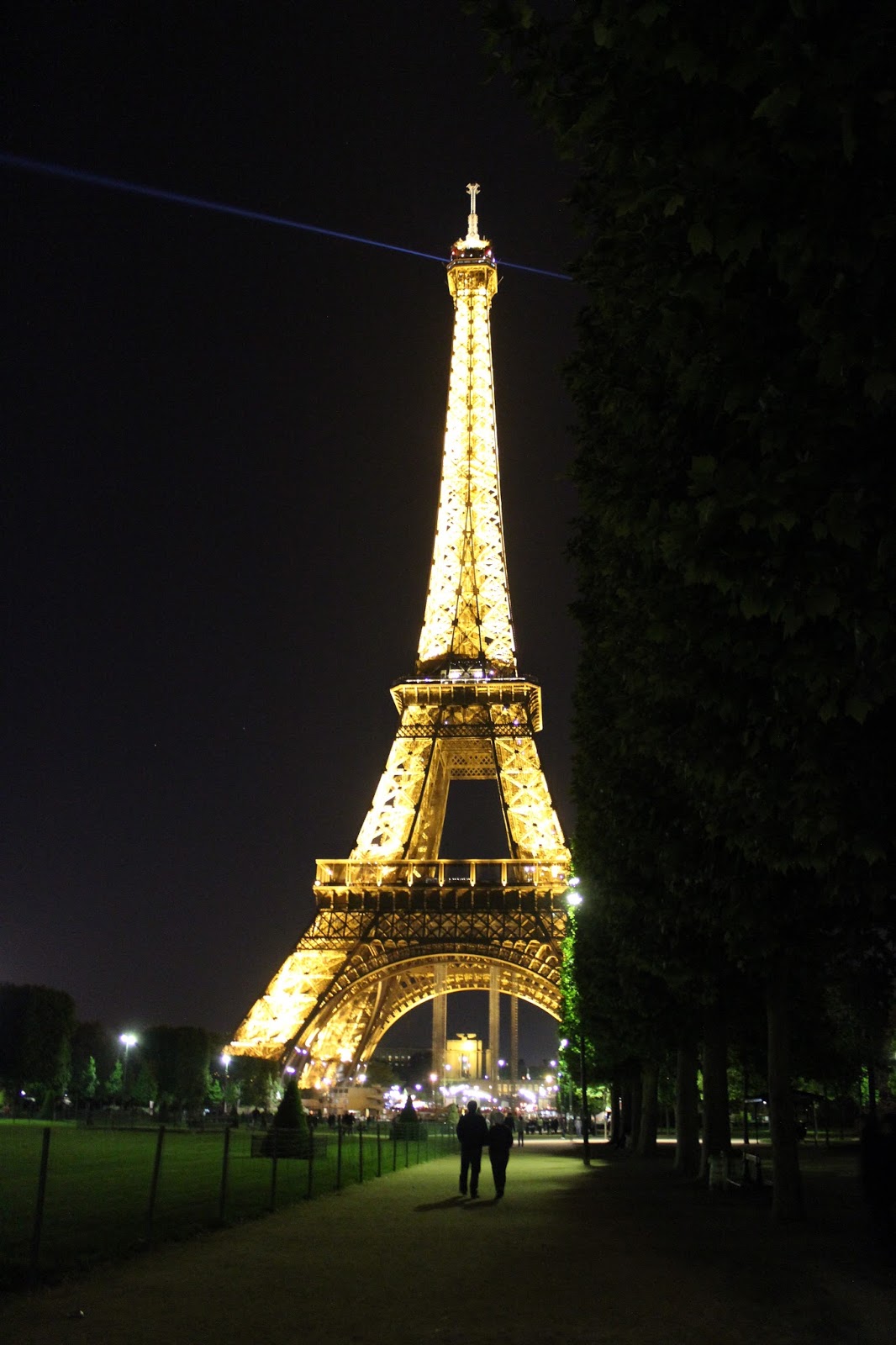 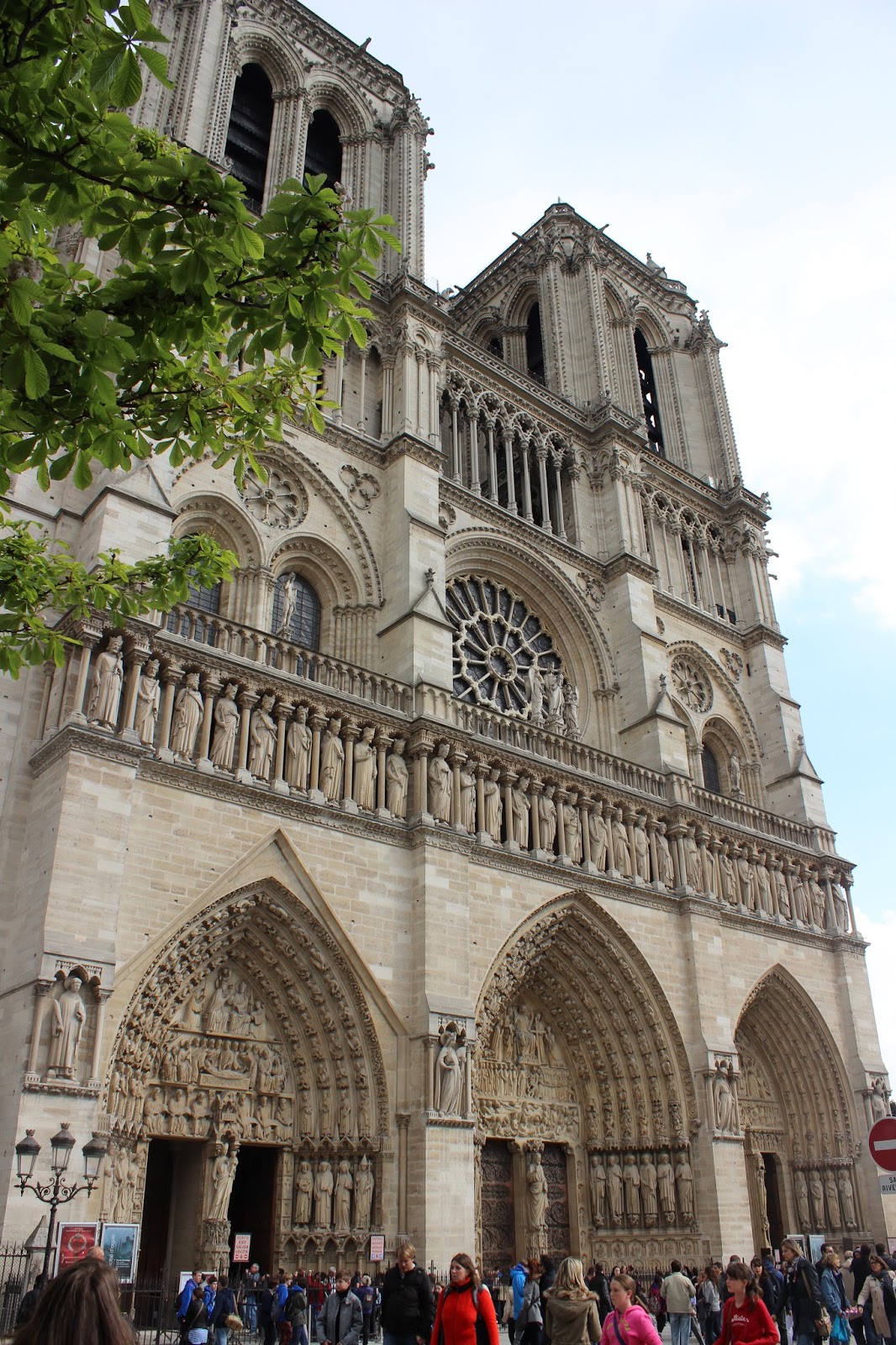 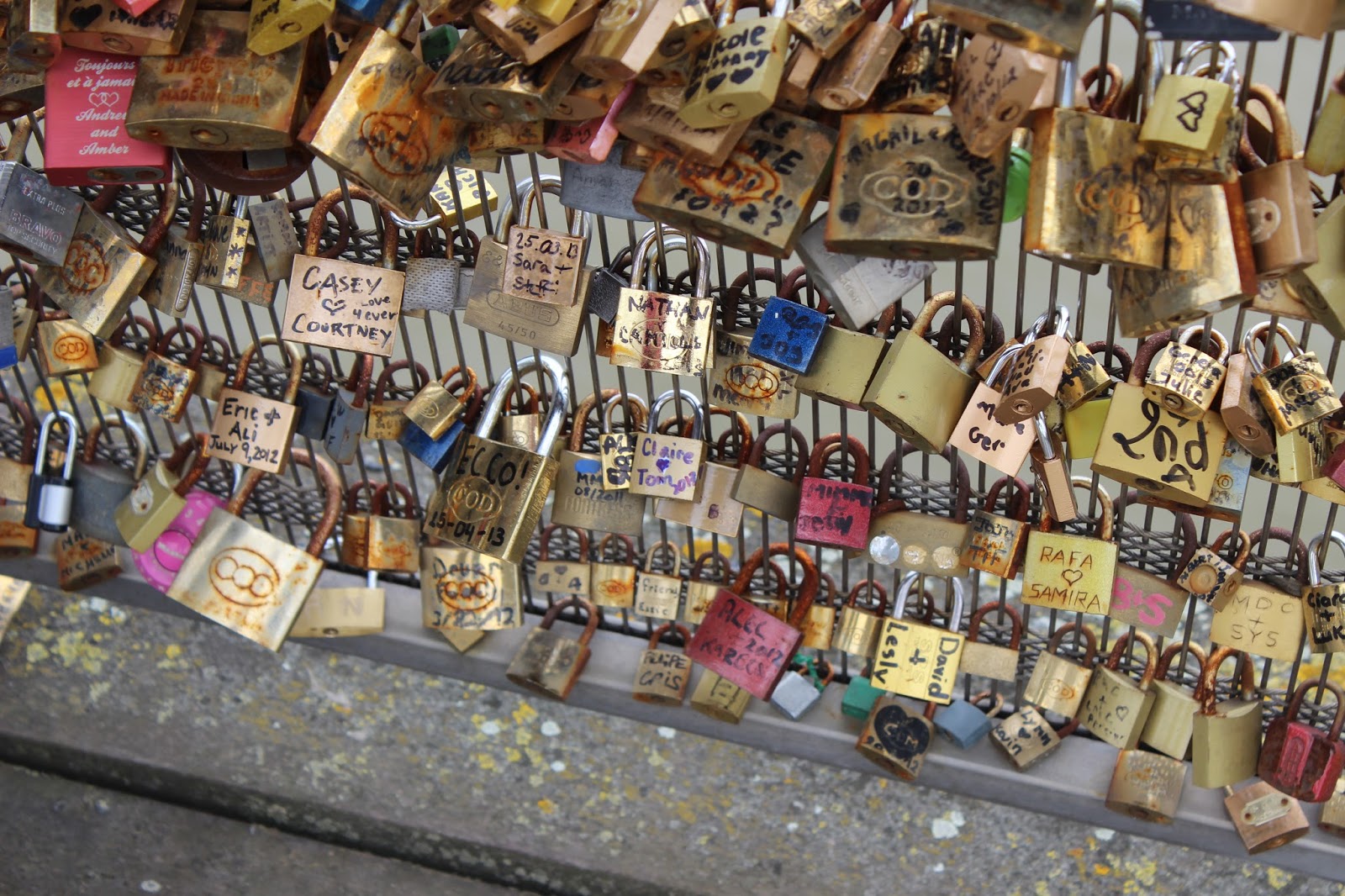 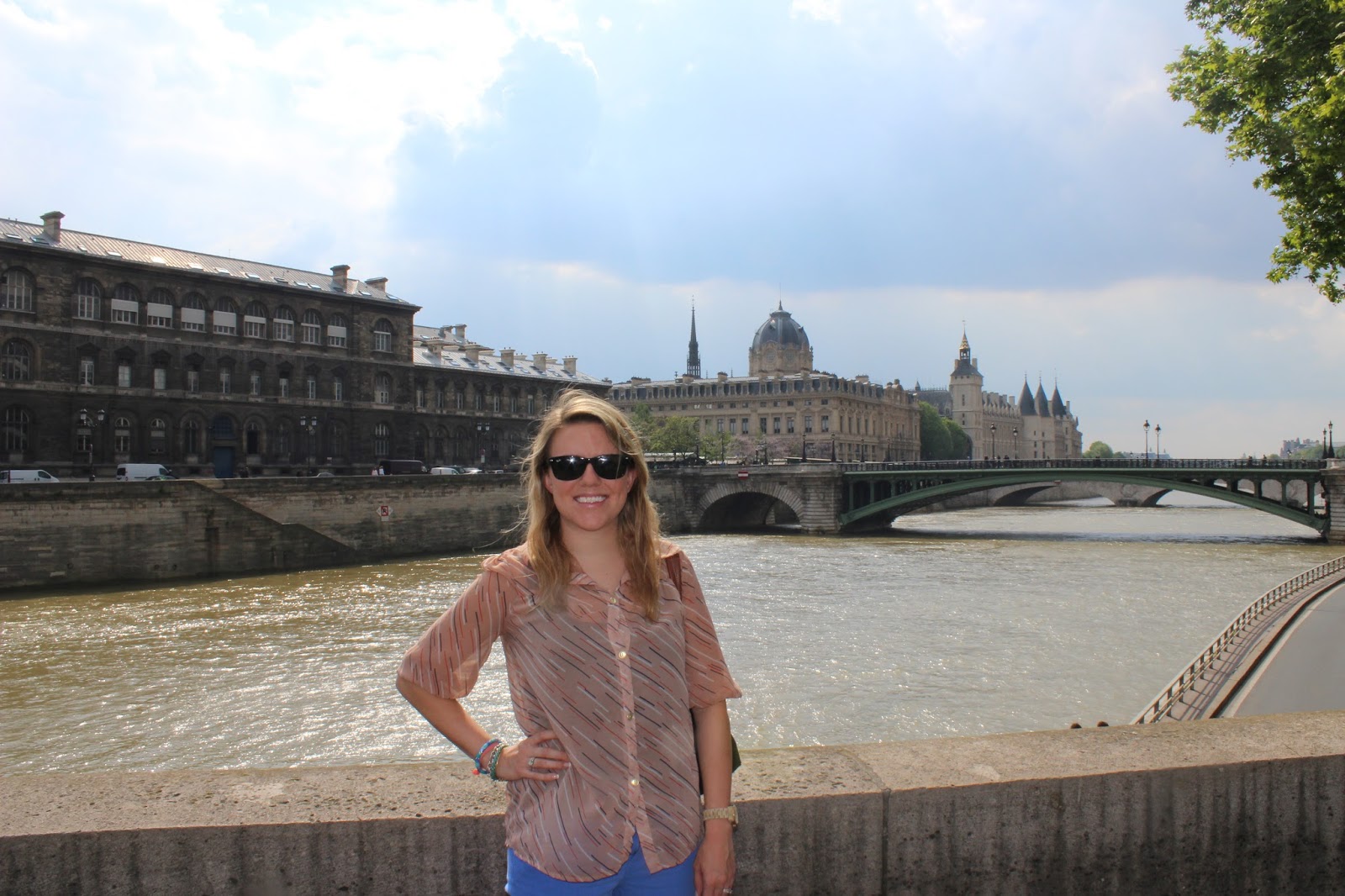 The day we drove back to Wiesbaden was Memorial Day, so we thought it was appropriate to stop at the largest American cemetery in Europe, Lorraine American Cemetery.  It was very peaceful and serene there.  It reminded me of Normandy – always a shock to see how many graves are there.

Back in Wiesbaden we spent more time exploring the city.  We celebrated our 2nd wedding anniversary (how has it already been 2 years?!?) one of the days, for which my mom got a big bottle of Prosecco to celebrate.

Mark took off from work one day and we all went to Heidelberg.  I went to Heidelberg once before, the summer before I began 9th grade, and remember absolutely loving it and thinking it was the coolest city.  Well my thoughts are still the same.  It’s a beautiful city with so much to offer.  Can’t wait to go again. 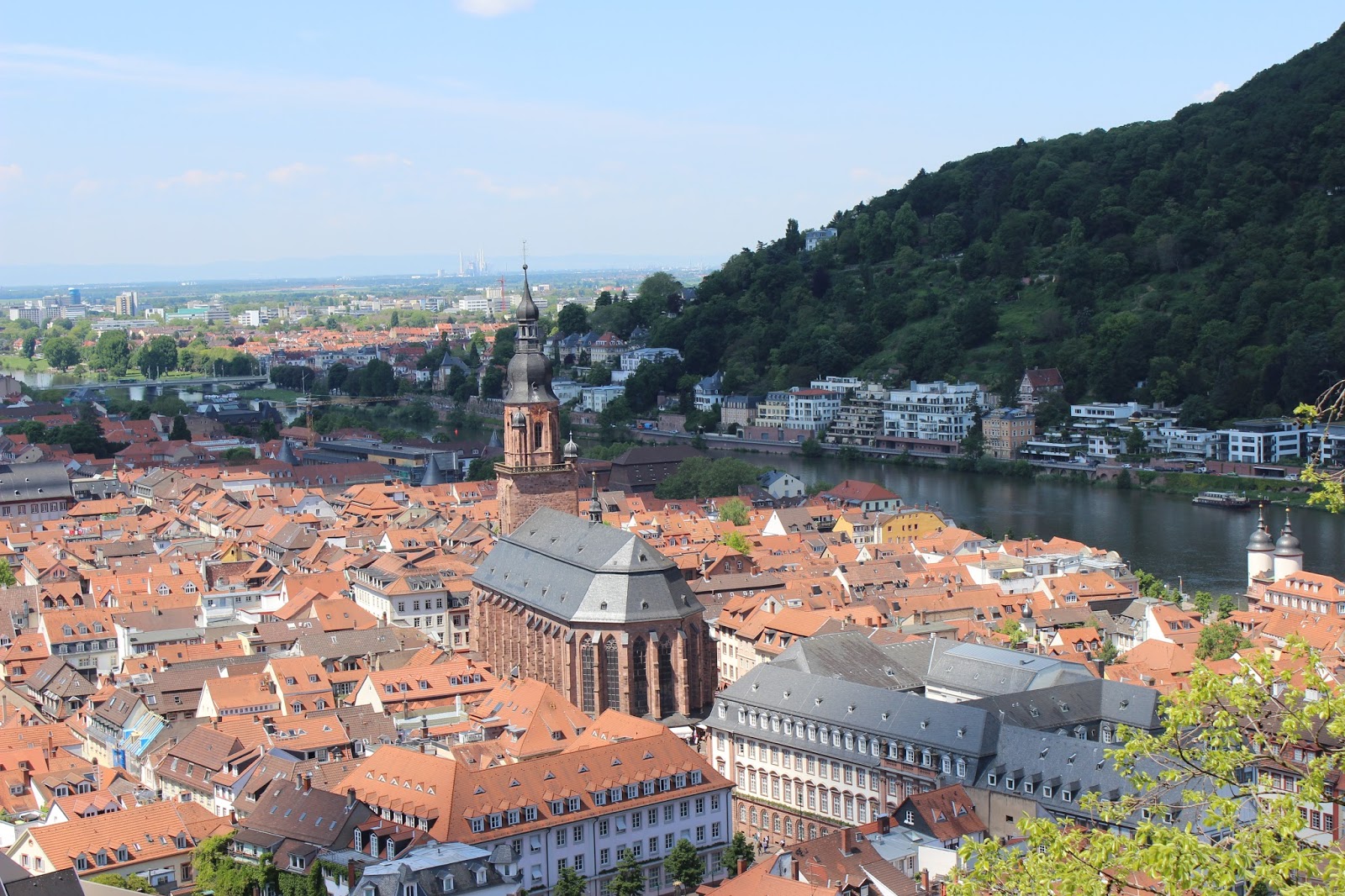 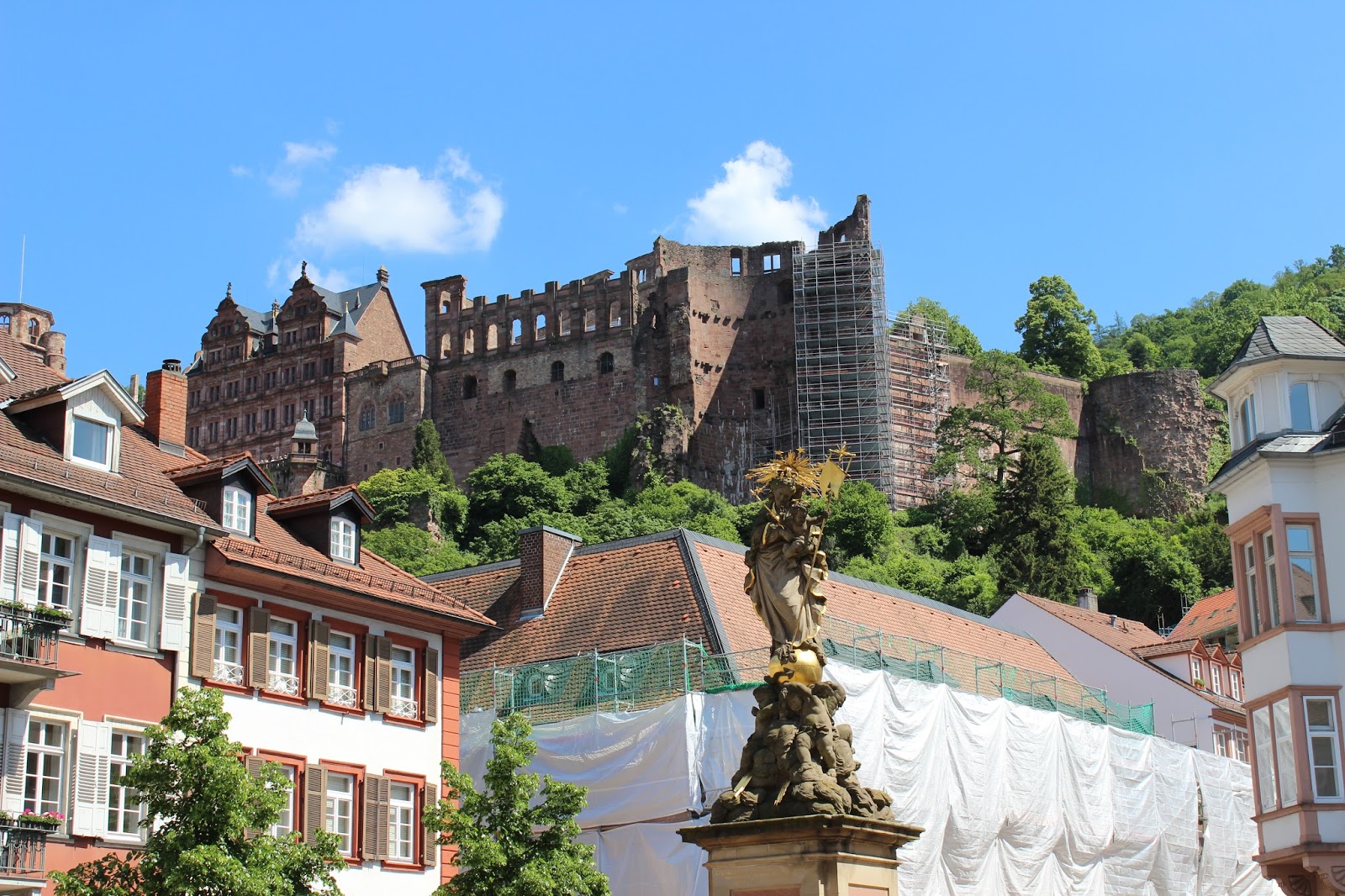 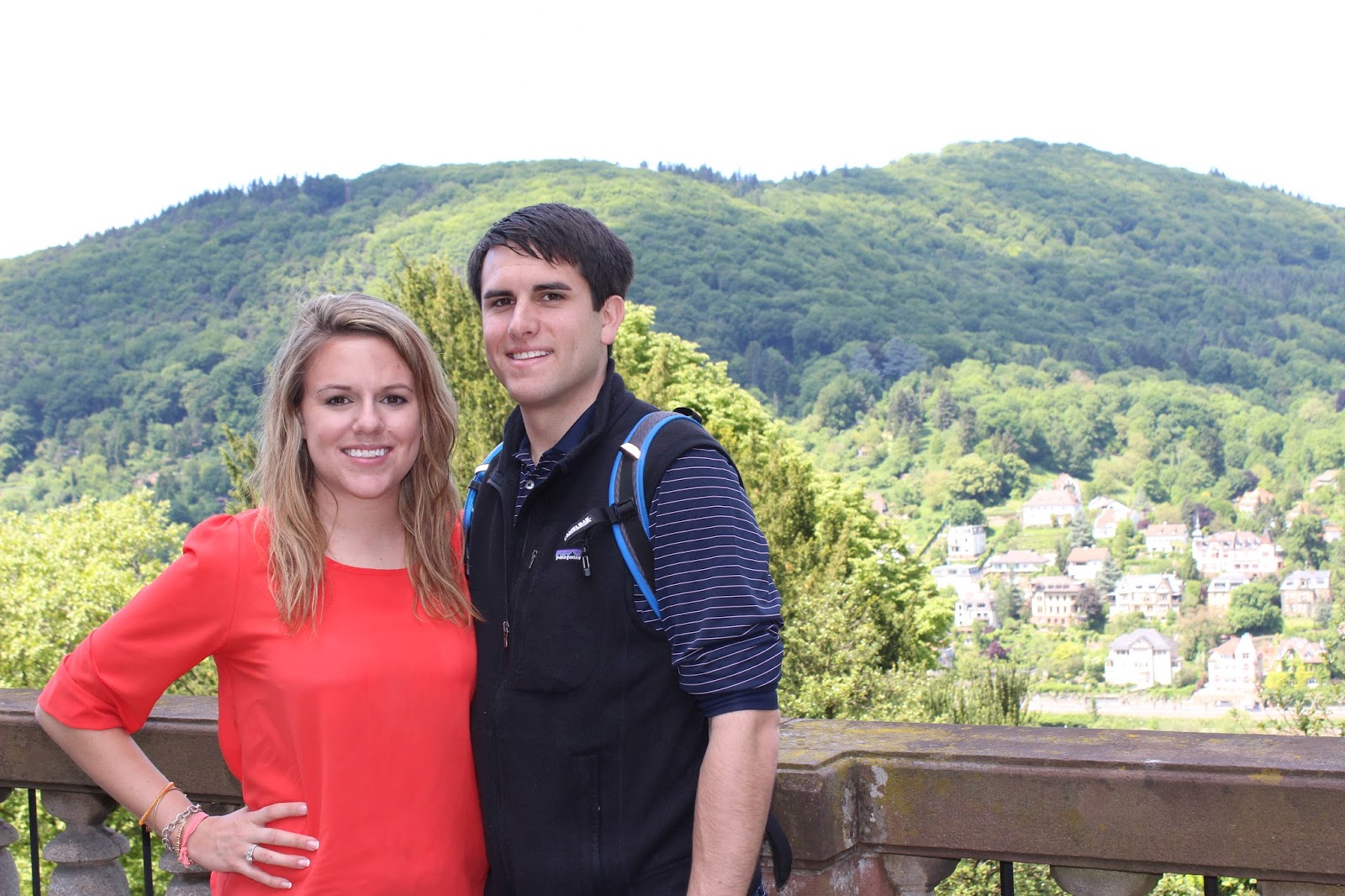 Take me back, please.  But one of my favorite parts of the trip was a day where my mom took Tom, me and Mr. Humphries to the Rhinegau region where all the vineyard and wineries are on the Rhine.  We took a ski lift to the top of the mountain, from which we got some amazing views of the Rhine, hiked all through the mountains, saw some ruins, and hiked down through the vineyards.  It was amazing.  After that we made our way to some of the wineries for some tastings.  My favorite was the Abtei St. Hildegard winery, named after the Saint Hildegard.  It is a convent that dates back to the age of Saint Hildegard (1165).  After our trip I read a book my mom gave me about the life of Saint Hildegard that was a great read and so informative, she did some amazing things and I had never even heard of her before.  Anyways, the nuns make the wine and do the tastings, which is pretty neat, and the wine was delicious.  We went to another winery, and then tried to find the Brothers Grimm winery because we saw some of their bottles in the store and the bottles had pictures of fairy tales on them.  Once we got there the winery was closed, but we heard noise across the street so we ventured over there and found a champagne tasting going on, and figured that would work for our purposes.  So we drank delicious champagne and sat out in the sun and had a great time.

Although at the end we had been there for 2 weeks it did not feel like we were gone that long.  I wish we could have stayed another week or two but I had to start studying for the bar and Tom had to get back to work.  Saying bye to my mom was hard, but hopefully she will be back here to visit again soon.  Overall we had a great trip and I can’t wait to go again!