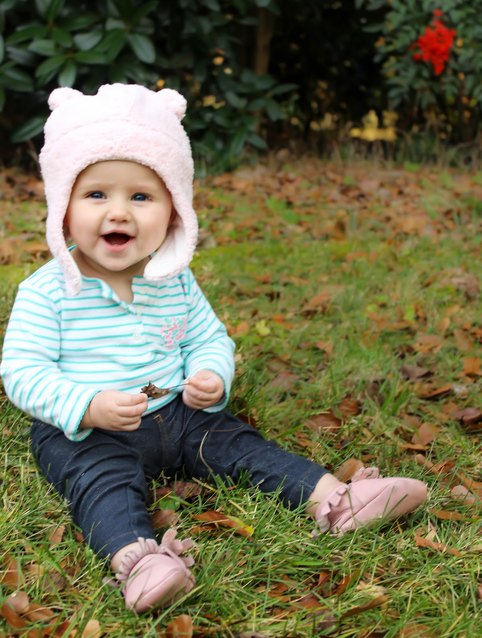 A lot of development happened over the last month. Maddie Grace is becoming more and more like a child every day, and I already miss her sweet baby self. Maddie Grace has one tooth now that is working it’s way up. We’ve thought she was teething for months but this is the first one to actually pop up! She seems to be handling teething well though, and hasn’t been overly fussy or seemed in pain. She says “Dadadadadadadadadadadada” all the time and has said “mama” a few times. Pretty sure she’s just playing around with noises but it’s still neat.

MG is finally sleeping better at night and sleeping in her crib in the nursery now for all her naps and at night. Some nights she ends up in our bed at an early in the morning hour when I have to nurse her but she always at least does the first half of the night in her crib, which is definitely an improvement. We are traveling to Savannah for a week for the Holidays and I’m hoping her sleep improvements don’t get too messed up.

In these pictures it is hard to tell because of the hat but Maddie Grace has SO much more hair now! It’s a dirty blonde/light brown color now, but I have a feeling she will have dark hair when she gets older. And I love that her eyes are still blue. Tom and I both have dark brown eyes but there are tons of blue eyes in our families so while they will be beautiful no matter what color they end up being, we are hoping they stay blue.

MG is an amazing crawler and the second I set her down she is on the other side of the house. She is now pulling up on everything that she possibly can, and loves to pull up, bounce happily, and then fall down and scream. She also likes to go from crawling to a downward dog pose. which I think is pretty impressive. Maddie Grace loves it when I throw her in the air, spin her in circles, and dip her upside down, She is thrilled every time I take her outside, and giggles in delight every time I pick her up to look at the Christmas Tree, a giant Santa cutout we have hanging, or even the cat. MG loves to read and play with things that are not her toys. The cat toys are especially appealing, next are any pieces of paper, and then of course electrical wires.

And of course Maddie Grace’s favorite activity of all is eating. Right now our favorites are zucchini and squash. She wants a bite of whatever I’m eating though and has started screaming when I don’t give her one, a habit which we are going to need to put an end to. Which brings up another thing – she’s started throwing tantrum-like fits when she doesn’t get what she wants, which I thought we had some time before she would start doing. I’m talking lays on the floor screaming and pounding her fists if I don’t give her whatever she wants to eat. Usually it’s a tissue or piece of paper that causes these fits, but they never last long.

I wish I had her eyelashes.

Maddie Grace has gotten huge. She’s very heavy and is outgrowing all her clothes. She is now in 12 month tops and 18 month pants. I have a feeling she will be out of these 12 month tops soon but I am going to squeeze her into them as long as possible.

I’m so excited about her first Christmas! We have some great gifts for her, but I know she will be most excited about the tissue paper, gift bags, wrapping paper, ribbons, and boxes. Here’s to another month and hoping the next one goes by a little slower.