My hair… I’m not sure where to even begin. We’ve been on quite the journey – some ups, I guess, a lot more downs though. I’ve never been one to have perfect hair but I’ve made some poor judgments when it comes to hairstyles. Now is actually the happiest I’ve been with my hair. Last night I even had a friend tell me my hair was the best she’s ever seen it look, which is impressive since I’m 6 weeks postpartum. Just a week ago my hair was the typical dry and brittle postpartum hair. But now… 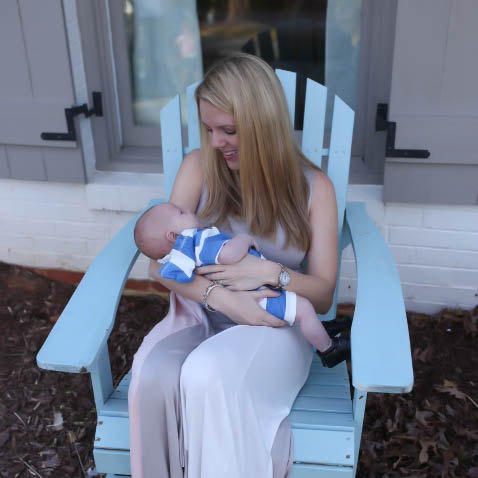 This is a picture from last night. I get my hair highlighted and cut by an amazing friend of mine, who even came to my house to do it after Tripp was born. I’ve been doing the same highlight/cut routine for a couple of years now. Since the last time I thought it was a good idea to die my hair dark brown actually. I know when this was because it was this terrible-ness on the pregnancy announcements we did for Maddie Grace.

Yikes. Let’s forget about that. I think my hair story goes all the way back to my first haircuts in preschool. My dad would cut my hair, and I typically had bangs and long hair. Nothing terribly out of the ordinary – no bowl cuts or anything of that nature. Eventually I started getting real hairdressers to cut it (sorry dad) and then in middle school I tried that ridiculous sun-in stuff and managed to get a weird brassy yellow color to my hair that I awkwardly let grow out. In 9th grade convinced my parents to let me get highlights for the first time. I let those grow out, and in 12th grade made the worst hair mistake of my life, one that I actually would make several more times before I learned my lesson – I bought a box of hair dye and I did it myself. It turned out a terrible reddish color that looked especially bad with the weird super short and with bangs hair cut I went for. It made for great senior pictures… not.

Then came college. I loved college. I had an amazing time in college. I also rocked some awful hair styles in college… let’s blame the alcohol (I mean caffeine mom and dad). I was always broke in college which led to me doing a lot of at home hair jobs which just never end well. Sometimes I would splurge and pay to have it done at the cosmetology school at the technical school in Athens. Also not the best idea. Sometimes my hair was dark, sometimes it was blonde, sometimes it was in between. I was always changing it up. It didn’t always look bad, sometimes it even looked pretty good, but there were definitely somme rough patches.

In law school I was more likely to have my hair colored professionally, but still went back and forth between brunette and blonde. All the color treating left my already weak hair incredibly damaged, so I could never grow it very long despite always trying to.

Well after law school was right when I got pregnant with Maddie Grace. Thankfully that dark hair mistake of our pregnancy announcement was the last time I attempted to dye it at home. From there I started getting highlights from a professional again, although it took a while to get it as light as I keep it now.

Since I had a baby 6 weeks ago I’m still considered in the postpartum hair period. I’m not sure why, but pregnancy and postpartum changes your hair drastically. Whereas my hair was rather healthy in pregnancy, both with Tripp and with Maddie Grace, both times it became really dry and frizzy postpartum. The years upon years of damage from having it chemically treated doesn’t help. So how am I at the point where people are telling me now that my hair looks really great?

Well, the NEW Dove Regenerative Nourishment Collection has done wonders. I have weird combination oily/dry hair and because of that I have to be particular with what products I use. I need something nourishing enough so it’s not frizzie, but that also effectively cleans my oily hair and doesn’t make it look greasy 5 minutes after I wash it. The Dove Hair Regenerative Nourishment products do just that.  My hair feels very clean, but also soft, smooth, shiny, and totally manageable.

What’s the craziest hairstyle you’ve had? PLEASE tell me all about it!