When we told people we were taking our daughter on her second birthday and our three month old son to Disney World for a week we got one of two responses. People either looked at us and said “you’re insane” or they said “that sounds like so much fun!” We figured, how hard can going to Disney with a baby and a toddler be? Let me go ahead and lay it out there – we had an absolute blast. I mean it was so much fun it was ridiculous. Was it easy? No. Do I feel like I could use a week doing nothing but laying out at the beach now? Of course. But worth it? 100%. I hadn’t been to Disney World since high school, Tom hadn’t been since he was a young kid, but turns out the place is still really magical as an adult. 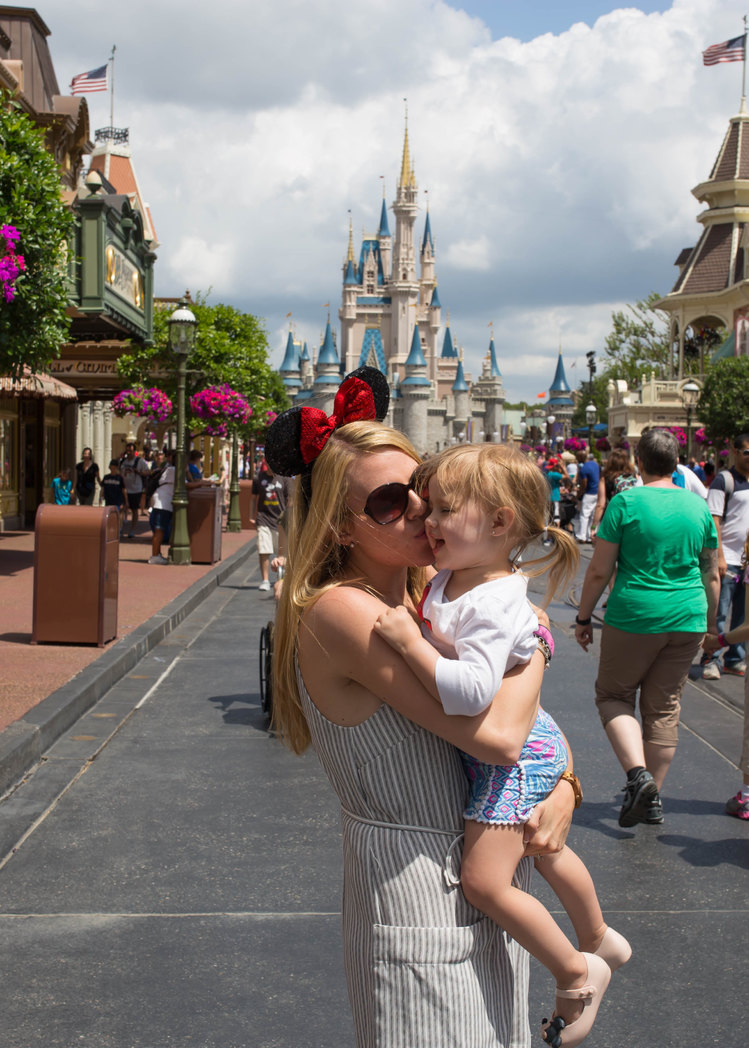 We stayed at Disney’s Port Orleans French Quarter Resort for 6 nights and spent 4 days in the parks – 3 of those days were at Magic Kingdom and 1 was at Animal Kingdom. We had a really great time. Maddie Grace loved every minute of it. She was thrilled to go to “Mickey’s house” and loved all the rides. Well almost all of them. My favorite ride, Pirates of the Caribbean, was “scary” and “NOOO” when I suggested going on it again. She’s still talking about princesses and trying to sing the different songs she picked up quickly from the rides and attractions at Disney World. She’s going to be too young to remember the trip, but the memories we made are priceless and Tom and I both really enjoyed ourselves. So if you are in our position and considering Disney World I say go for it – you’ll have a magical time.

So here are my tips for surviving Disney with a baby and a toddler: 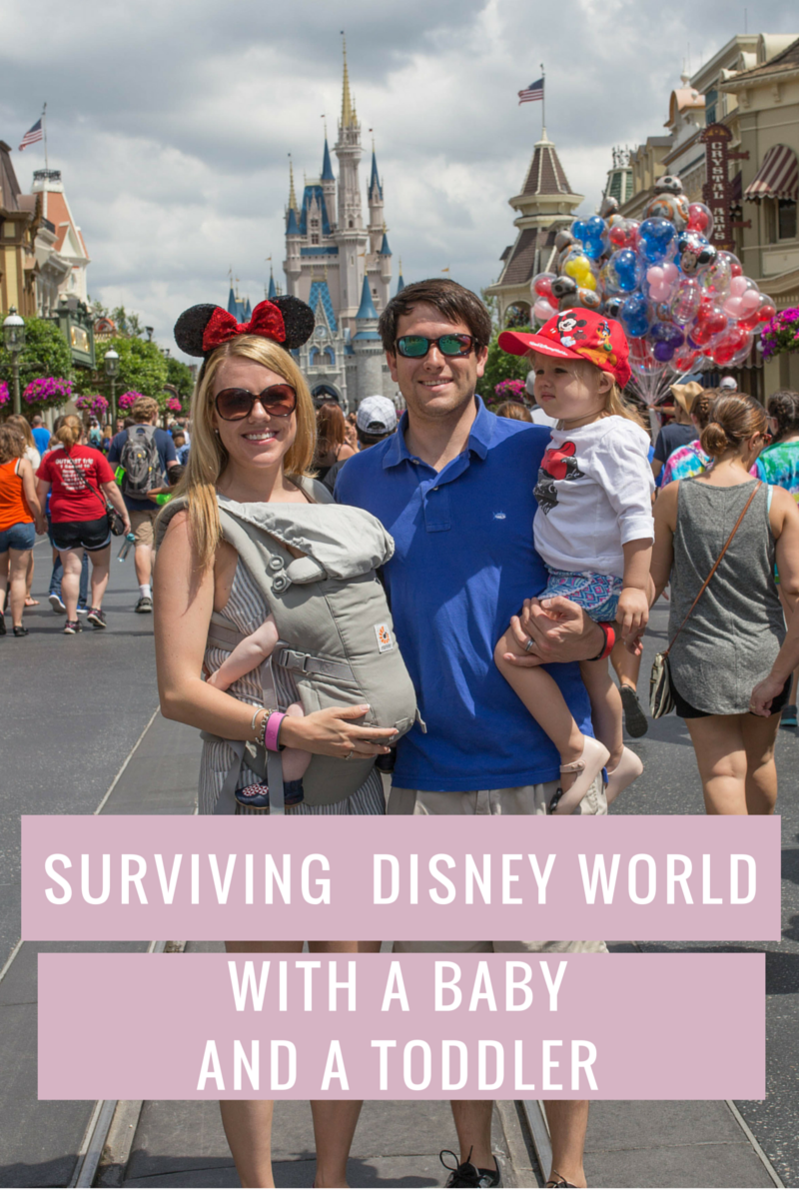 –Stay at a Disney resort. Disney has many different priced resorts with several very budget friendly ones, and you can usually find a great deal on them using Expedia. Port Orleans is a moderate priced resort but not outrageous at about $200 a night. And it’s an amazing place. The resort is set up to look like New Orleans (hence the name) and is just gorgeous complete with squares and a pretty river. Disney got every last detail down at the resort and it’s hard not to appreciate the beauty of it. There’s also a great pool with a toddler-friendly splash pad that Maddie Grace loved. She was also a big fan of the playground and watching the horse drawn carriages that guests can take rides on. The food at the buffet was lacking but not terrible, and it was convenient to have there. We also enjoyed the nightly live music and the poolside bar Mardis Grogs. I also loved that the resort had extra kid activities like movies under the stars and campfire s’mores but we really didn’t take advantage of those. 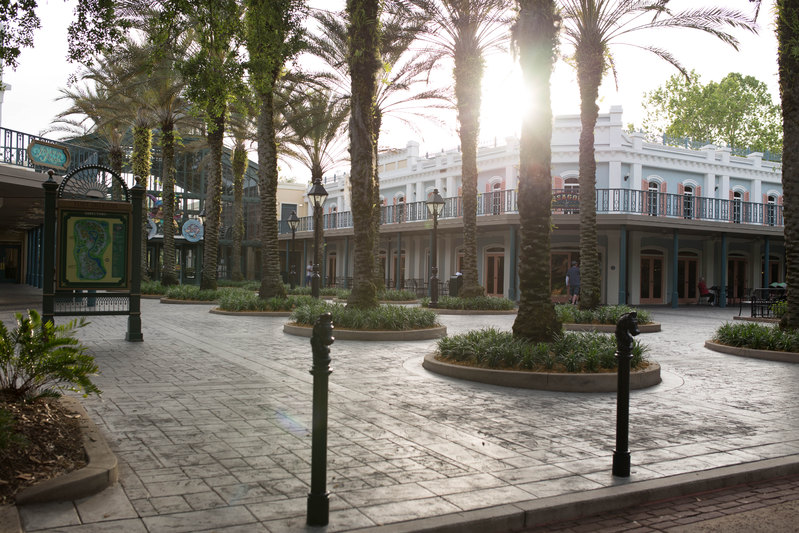 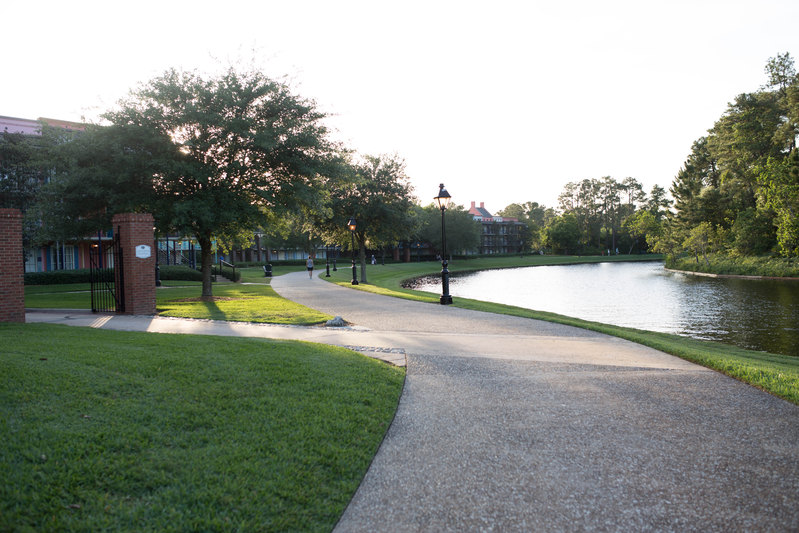 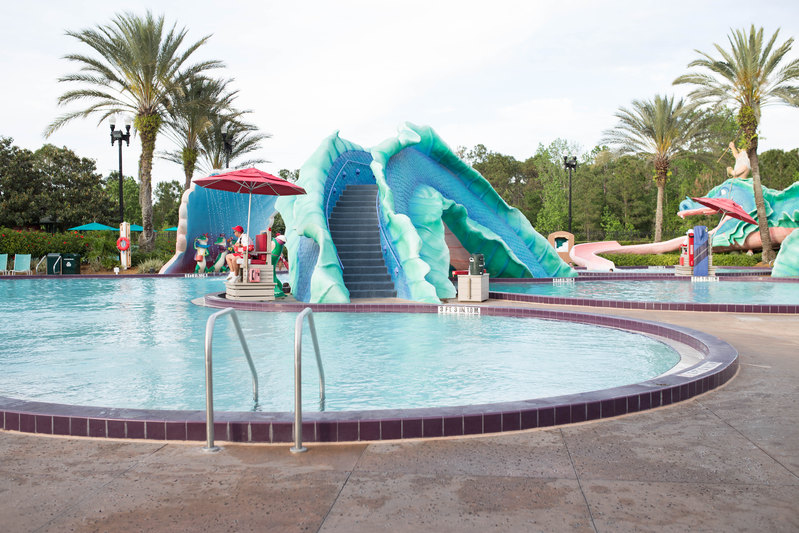 –Take your time. Don’t try to plan too much into each day and take it easy. If not you’re going to get stressed out when the baby needs to nurse or your toddler throws an epic tantrum. We just really took it easy each day. If Tripp got hungry I stopped to feed him. If Maddie Grace was hungry we stopped for snacks. If one of them (or both) pooped we stopped to change their diapers. We were in no rush to get anywhere so it wasn’t a big deal at all. We scheduled our three fast passes each day (each one gives you a 1 hour window to get to the ride) and our big goal was just to do each ride we had fast passes for during our time and enjoy ourselves and each other.

–Schedule in a pool day or two. We woke up Monday not feeling great. None of us. So we spent a short day in the park and went home to the resort. Tuesday we felt worse. Since we had a built in pool day we decided to go ahead and take it Tuesday. We spent the morning at the pool, took a long afternoon nap, and then went to bed super early. It was perfect. Wednesday we woke up feeling refreshed and recharged and ready to go. 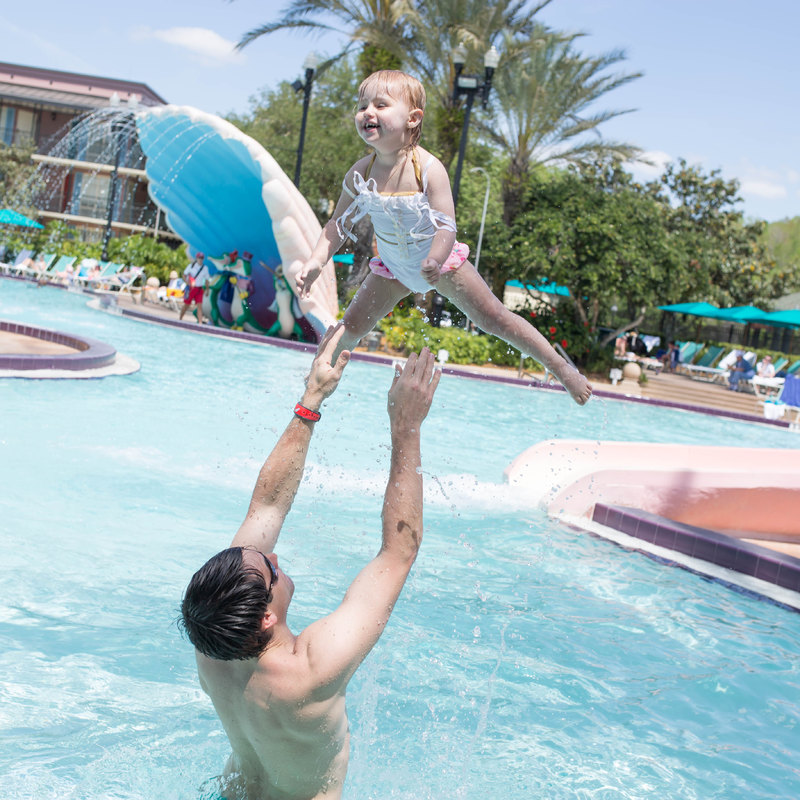 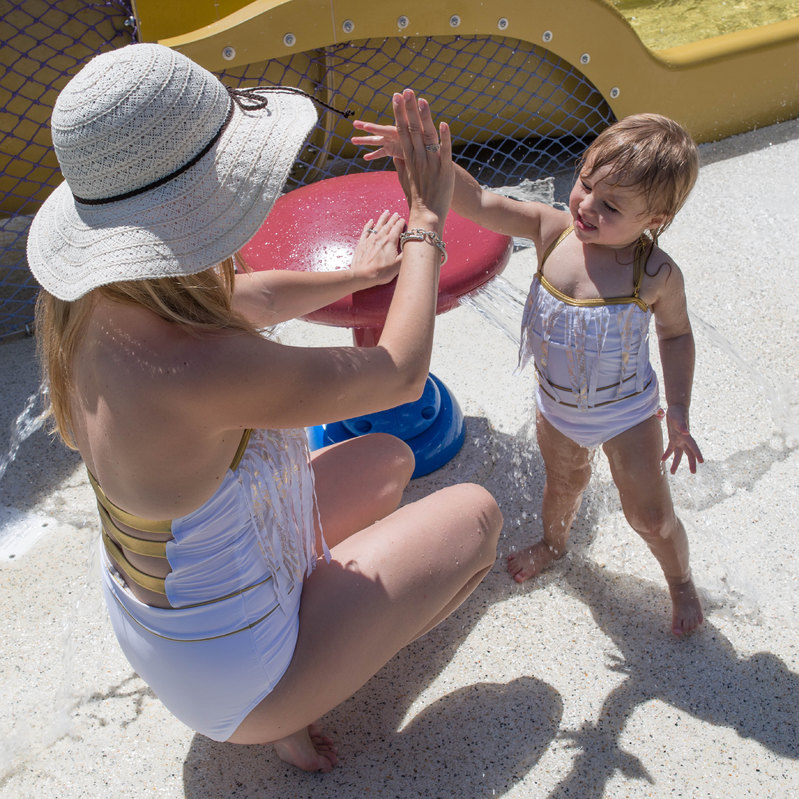 –Wear the baby. Any ride that a toddler can go on a baby can go on as well. You just can’t bring a stroller onto any ride or have one while standing in line. That’s where you’ll want to wear the baby. This will make your life at Disney World so much easier and free up some hands for toddler wrangling. If you’re going during warmer months you’ll want a lighter weight carrier like this or this one. 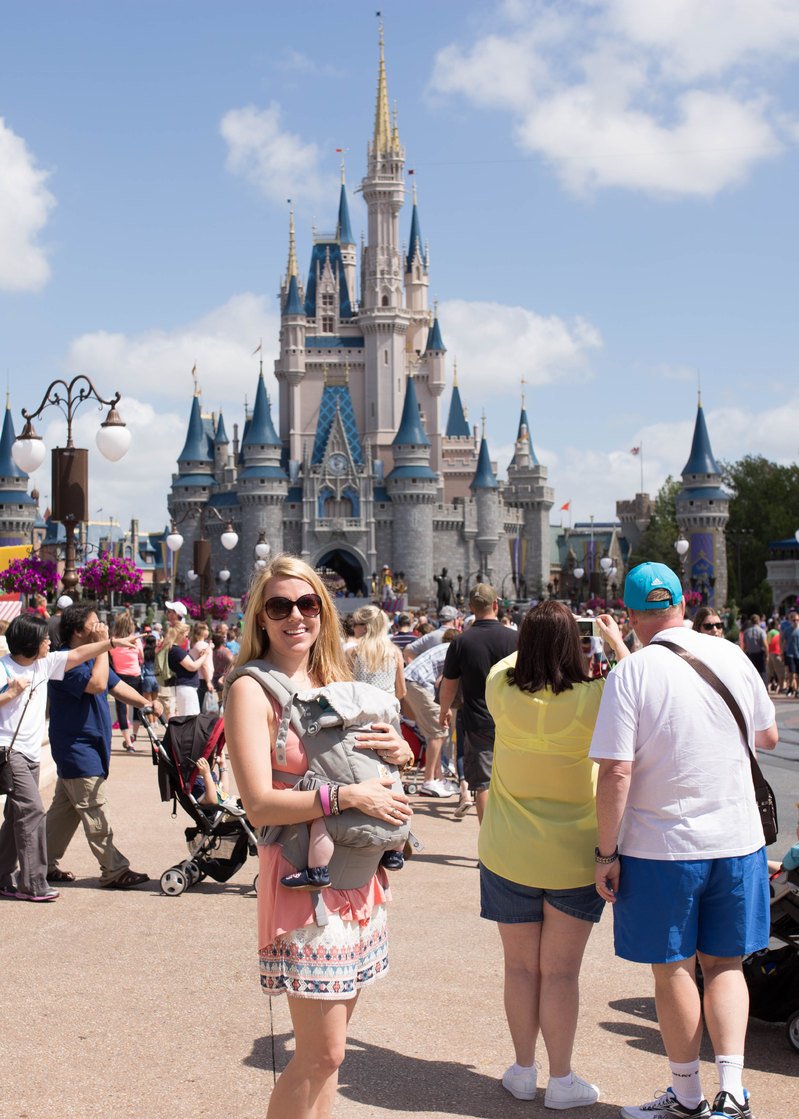 –Go to Mickey’s Backyard BBQ. This was probably the most fun thing we did. Mickey’s Backyard BBQ is a country western dance party with an all you can eat buffet and beer/wine/sangria. Children under 3 are free, and it really seems aimed at the younger child crowd. Maddie Grace loved dancing with Minnie Mouse (pretty sure that was one of her life dreams) and getting to meet and have her picture taken with Goofy. The BBQ is at Disney’s Fort Wilderness Pavilion which is right by the gorgeous lake at Fort Wilderness that we spent some time at afterwards. 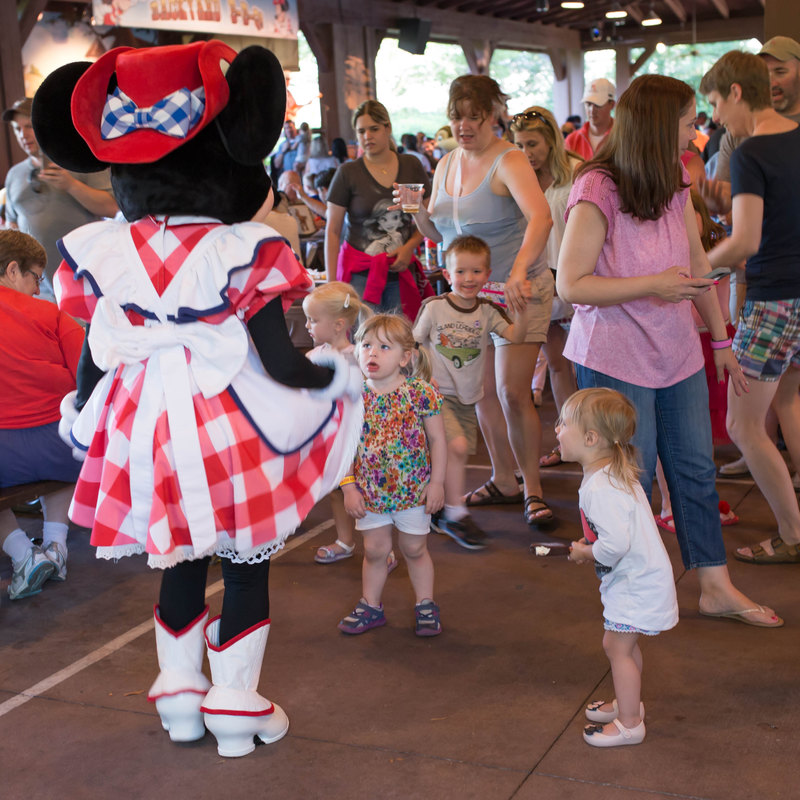 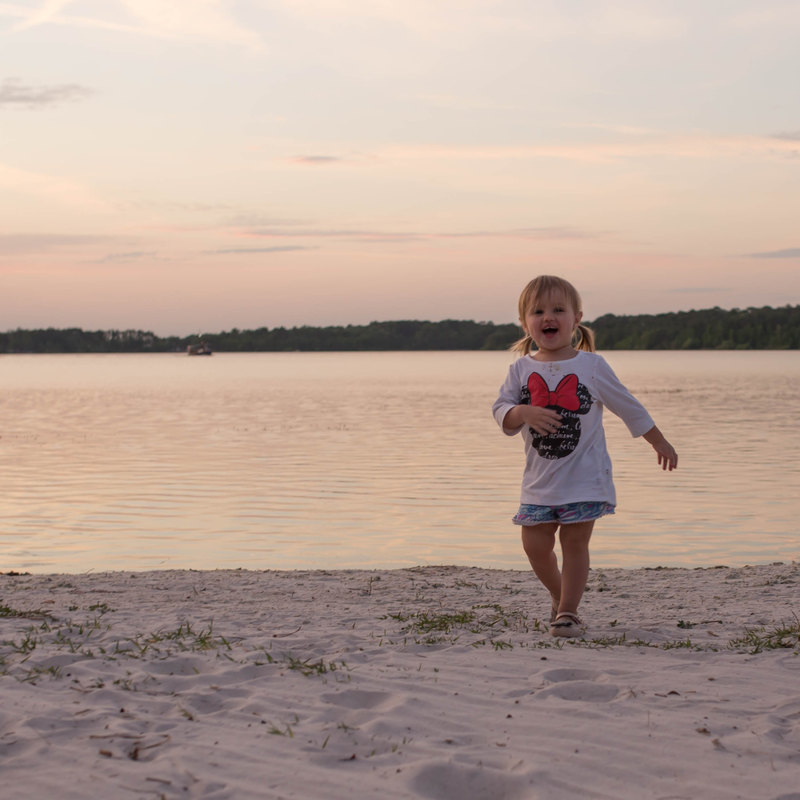 –Watch all the classics before you go. The characters you and your children meet at Disney do an amazing job. They are all very in character and each one is great with young children. MG isn’t really one for sitting down and watching movies at all but I so wish I had made her before our trip so that she would have had a better grasp of who each princess was. Maddie Grace was rather shy and timid meeting each princess but every single one she danced away from giddily with a smile on her face which was so much fun to watch! 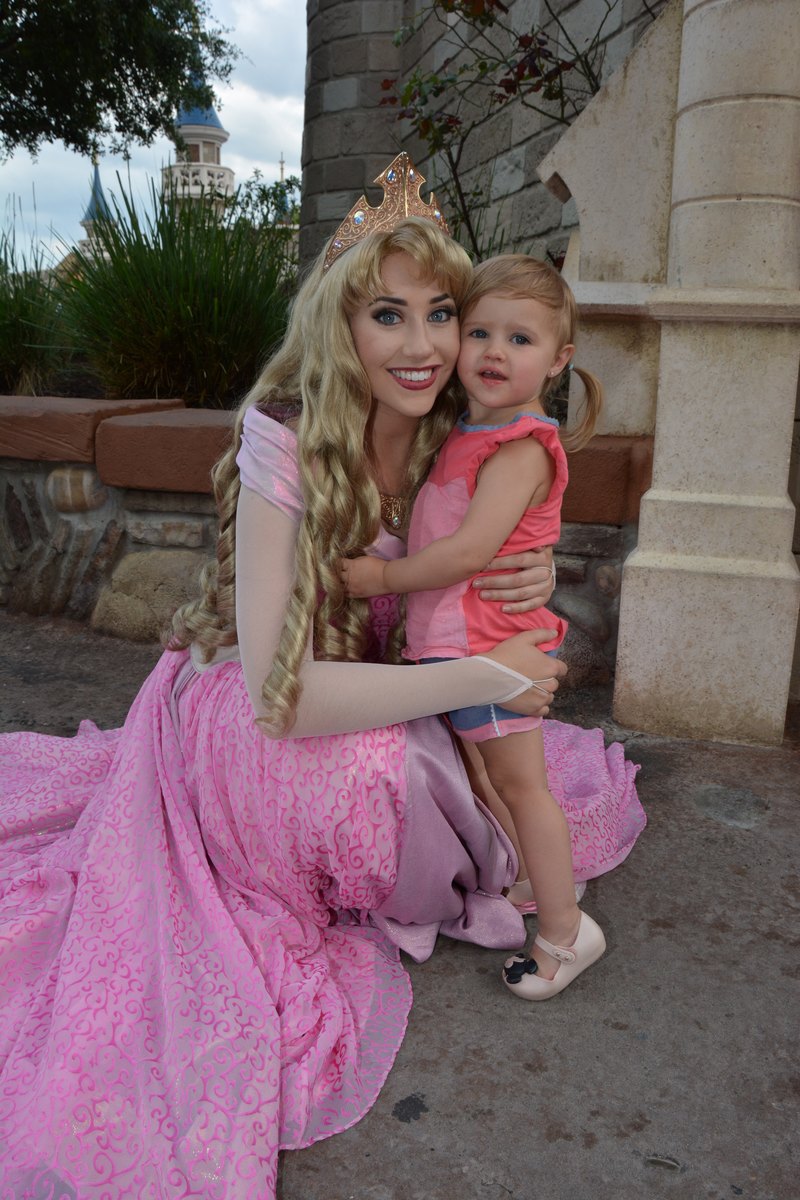 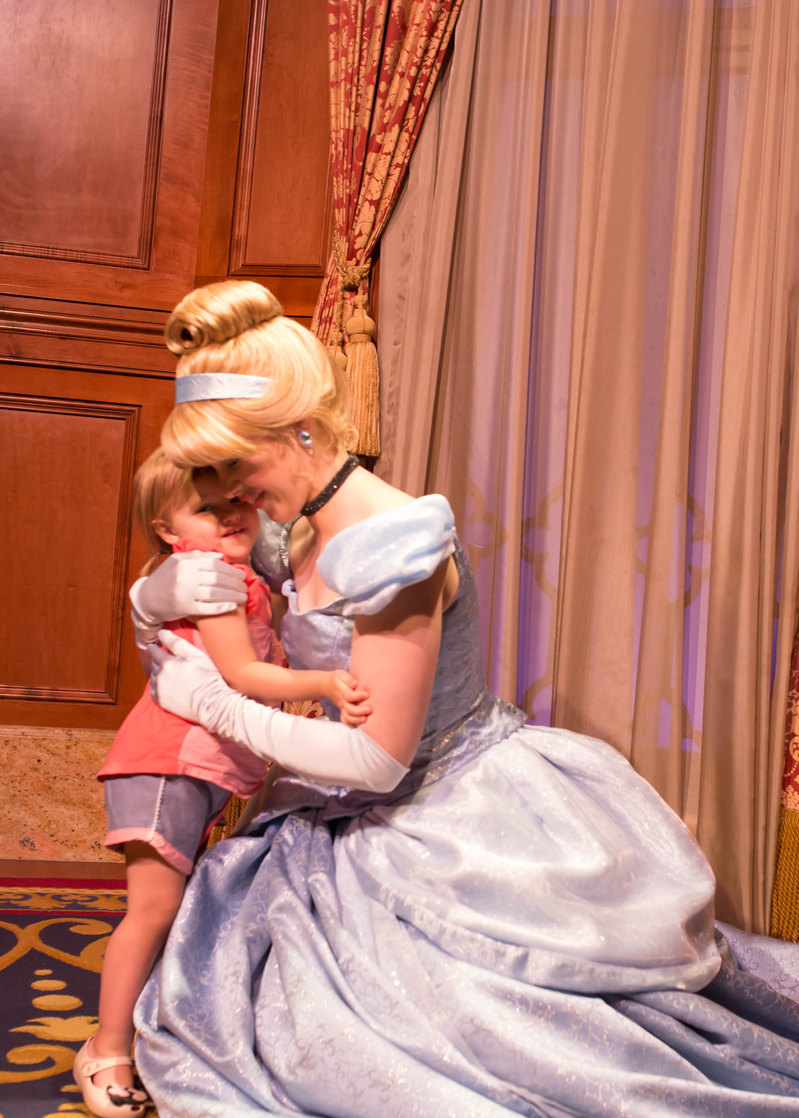 –Get up front for the parades. Even if it means sitting on the curb for an hour it will be worth it to see you toddler’s face light up as their favorite characters go by. Maddie Grace thought the parades were so fun and loved waving at the characters and shouting their names.  While we waiting for one parade she started dancing and singing “Mickey’s coming! Mickey’s coming!” so we knew she was really excited! 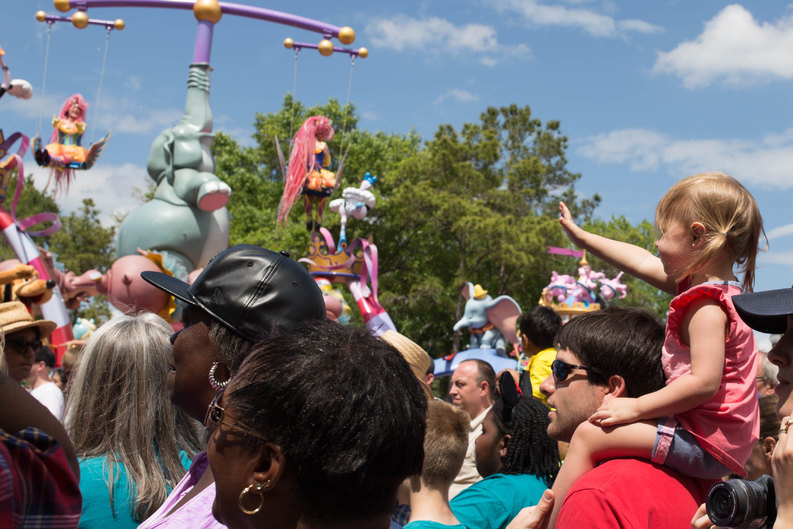 –Check out Animal Kingdom. The day we spent at Animal Kingdom was so much fun. I loved all the sights and sounds going on, and Maddie Grace loved watching the animals and especially the safari where we got to be super close to giraffes and several other animals that she freaked out about. 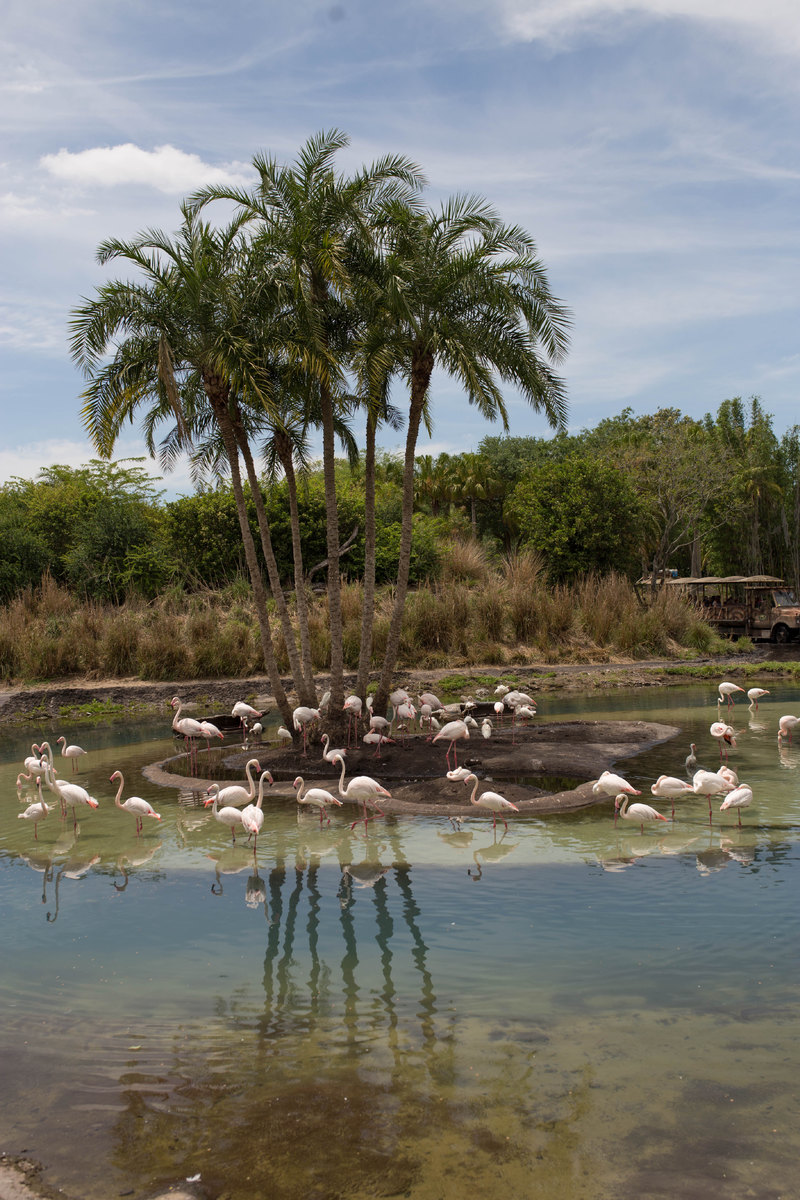 –Bring an easy to fold double stroller. Even if you’re wearing the baby or the toddler wants to walk you’ll be glad you have the double stroller when both kids need to nap or to carry your bags in. We borrowed this stroller from some neighbors and it worked out great because of how easy it is to fold which is great for getting on and off buses and the fact that it’s fairly lightweight. Before we went I was also looking into getting this stroller for the same reasons. 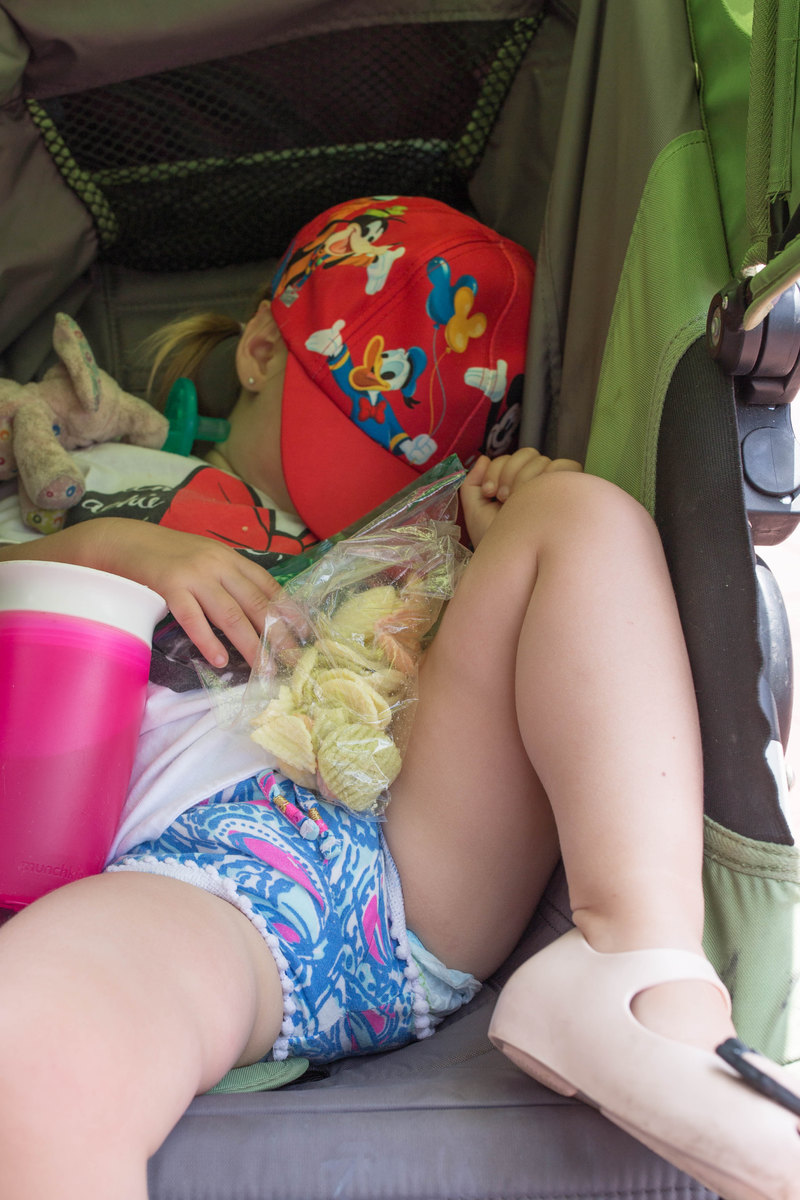 –Stay late at Magic Kingdom one evening. I know you might think that is really crazy, but we did it our last night and it was one of our favorite parts. We watched the electrical parade, and the fireworks over the castle. And best of all after around 7 the lines for everything dropped dramatically. We were able to basically hop on any ride and walk right in and meet Ariel at her grotto as well as Cinderella and Rupenzel. We stayed until Maddie Grace passed out in the stroller and it was a really magical night.

Things I don’t think we needed but other people might:

Memory maker. For $150 you can pay to have digital copies of every picture taken on your trip to Disney by Disney photographers. This includes on ride pictures and the memory maker photographers located around the park. Want a picture? You can easily locate a photographer on the Disney World My Disney Experience app.  I’m big into taking pictures myself (in case you didn’t realize from me being a blogger) and I took my nice camera with me everywhere and got my own shots. The memory maker people are happy to take pictures on your camera for you, and know how to work DSLR’s. However, if I was not as into taking pictures and decided I did not want to lug around a big camera with me, memory maker would have 100% been worth it.

Park Hopper tickets. Disney transportation is pretty easy to use and buses come very regularly, but it’s still a struggle to fold up the stroller and get a toddler and baby onto a bus. So park hopping was not going to happen for us. Also returning to the park after we got back to the resort was out of the question. Some people might like this so they can go to one park for a few hours and then another for a few, or go to their resort for nap time and then return to the park, but that was overly ambitious for us. Maddie Grace took her afternoon nap in the stroller each day and when we were tired we headed back to the resort to relax for the rest of the day. 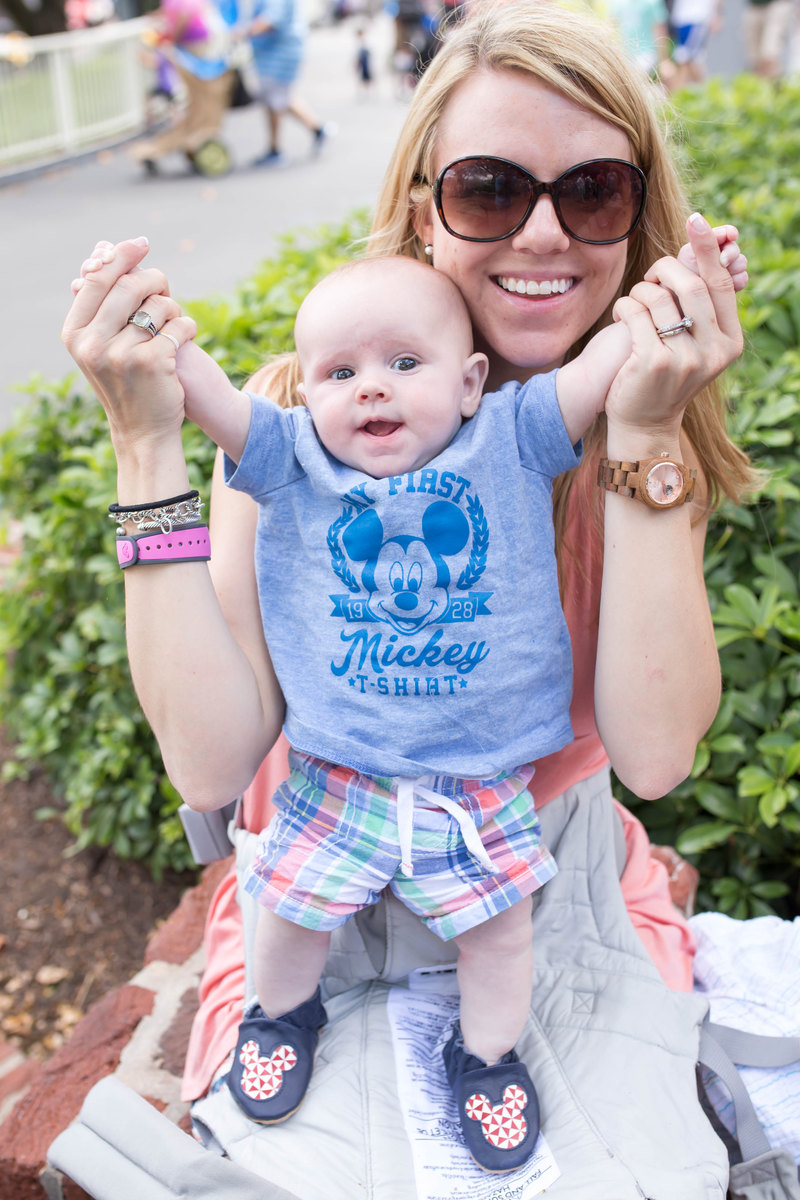 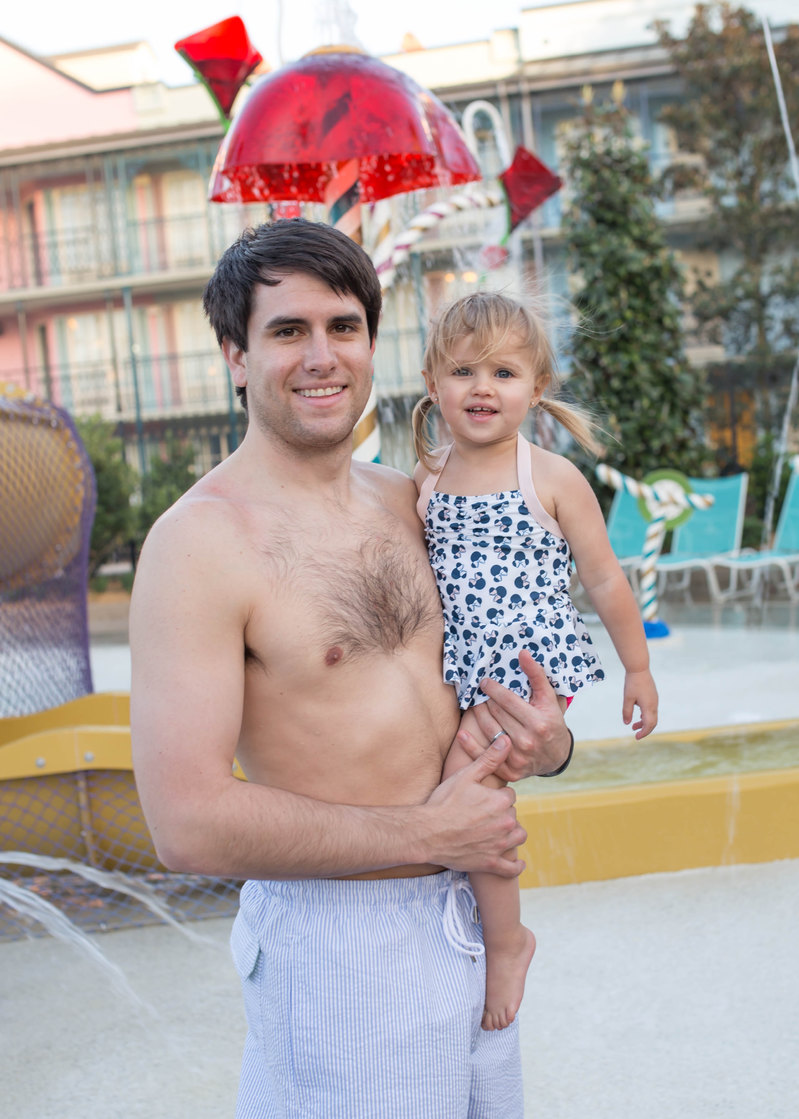 Overall it was a great trip and I would do it again in a heartbeat. We are already planning out our trip for Maddie Grace’s third birthday and getting excited about it. Have you been to Disney with a baby or with kids? I’d love to hear some of your pro tips below!